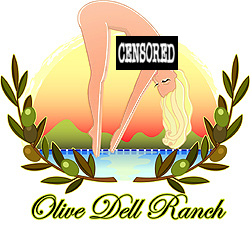 1997
Straight out of High School and before Junior college I went to school to become a massage therapist.  While I was interning I had the opportunity to go  to Olive Dell ranch (nudist resort) to  give out  free massages during National Nude Weekend.

I even lined up a cute girl to head out there with me but at the last second she chickened out (Oh Well).  My buddies girlfriend wanted to go (awkward) but he cool with it. (so was I) We had a great time,  I think I only gave one massage (thats what happens when your working tips) and spent the rest of the trip enjoying the specticle of humanity.

That was my first and last foray into the world of nudism
(other than the occasional skinny dip in the Pacific or streak around the block)
People come in all shapes and sizes and no place is that more evident than at a nudist resort.
(we are all animals)

Fast forward to last summer.  While trolling through some Barefoot forum on the Runners World website I came across a link to a website that contained a list of all the nude races across the country. Obviously it was the natural next progression of my career as a runner.  The only race within 500 miles of me just happened to take place at the Olive Dell Ranch.

I did not want to miss this opportunity.

I could have preregistered but just in case something happened at  ragnar I held off.

I think I was the first non regular to show up.  I parked my car off in the boonies and was not sure if I should strip down or if I should wait?.
I decided to stroll up to registration in my board shorts with my backpack on carrying my sandals and a towel.
As I was signing up I noticed some chick painting numbers of people's right thighs.
(Nowhere to pin a bib.)
Time to get Naked I thought.
I stripped down to my birthday suit and next thing I knew I had a naked lady bent down in front of me painting my number on.
(If only every Sunday could be so glorious)

I still had about an hour and half to kill before the race.  The sun was shining bright and parts of my body were feeling it's rays for the very first time.  I started to lather up with sun screen. ( it felt a little odd touching my junk in public but I really did not want to get burnt.)  The paint was still wet on my leg which kept me from putting any protection on the top of my thigh.  I thought I would later but I forgot.
(more on that at the end of this post)

People were starting to show up and I began to size up the competition.
(Not like that)
Get your mind out of the gutter!
I wasn't there to sword fight. I was there to run.

About 100 or so people showed up to run and about 15 to 20 looked like they could give me some competition. Astoundingly out of this small group of people about 12 of them had also just run in the Ragnar relay.

I recognized one dude from some ultra races and then minutes before the race started up strolled my buddy Eric Clifton , one of Southern California's best Ultra runners and former winner of Badwater. He had just come from Ragnar as well.

I hadn't really planned on running into anyone I knew at this race. For about 30 seconds it was awkward talking to my naked friend but life's way to short to worry things like that and it was nice to have someone I knew there.

As for the ladies in the race. There were lots of lovely human beings,  some lovely than others ;) .  The presence of even just one beautiful naked woman can bring inner peace to so many.
(probably pretty therapeutic for my health as well)
In no way was their any kind of sexual vibe going around.  But that's not to say I wasn't walking around with a smile on my face. 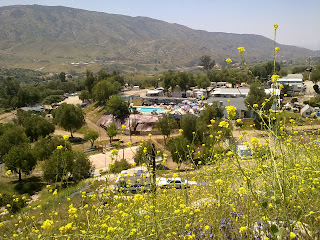 The Olive Dell Ranch owns a 126 acres of land

The course took place on an old burro trail created by  herds of wild  burrows, descendent's on mining animals long ago.
The terrain was pretty much 1.55 miles straight up a few steep hills and then back on gravel filled trails with a  single back trails on the steeper parts of the course.

I had wanted to run barefoot but my legs were pretty fatigued and the course was somewhat technical.  Because I was tired my reaction time to adjust my weight if I stepped on something uncomfortable would be much slower.  I decided the smart move would be to lace up my Luna Sandals figuring I'd have a greater chance regretting being barefoot than in Huaraches. For this race I wouldn't even wear a watch. 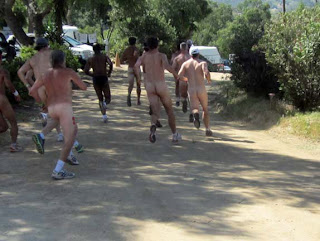 Can you find me?  I'll give you a clue I think I am the tannest and also the most butt white (literally) runner in the group.


I'm pretty comfortable being naked around others but that's when I have my own personal space.  The stating line was a little strange as we all corralled in tight like a package of hot dogs.  I couldn't wait for the air horn blow and I stormed out of the pack behind 2 other runners.

Running Naked felt good and I quickly found a rhythm as I ran out of the resort and to the hills in 2nd place.  I theorize that because I am a forefoot striker my twig and berries stay at that same pace as my feet. when I strike the ground my feet are directly below my torso resulting in very little floppage.

As for the the shoe wearing heel striker I cringe at the thought.  When the foot lands way in front of the body. a dudes dangling participles gain inertia,  they begin swing out of control in a pendulating motion. Eventually their nads dangle so far they may  slap the runner in the face.

Perhaps I had an unfair advantage running is huaraches.  What do you think of the new slogan for Luna sandals I just  came up with.
"Footwear for dudes that don't like nads slapping them in the face."
(I'm guessing thats a pretty big market) 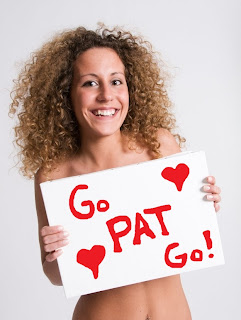 my fans were everywhere :)
This is how I choose to remember it.

About a 1/2 mile in I took  the lead and there was no turning back.  I expected my legs to be more tired but they felt great.  I ran exhilarated by the freedom my nakedness.  By the time I got to the midway point (the highest point on the course) I had a 1 or 2 minute lead.  I ran smart and steady on the way back.  The return was pretty fun passing all the Naked people climbing the hill.  I think many of them were surprised that the dude in sandals was in lead.  It was just a 5k and the race was over in what felt like 5 minutes.  I crossed the finish line in first place a few minutes in front of second place establishing  a new course record by aout 4 minutes.
(only the 2nd year of the event)

My first win of the year. 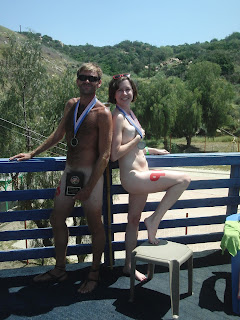 Here I am Posing with one of the female winners.
Good thing I won an award. 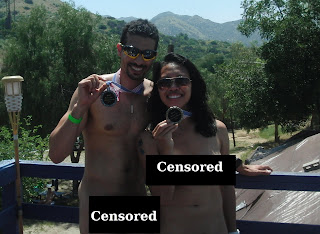 The womans winner with her Husband

they both ran the L.A. marathon and doing their 1st Ultra next month.  They recognized me from the Naked Tour event  that we both attended the week prior.
(Its a small world aint it?) 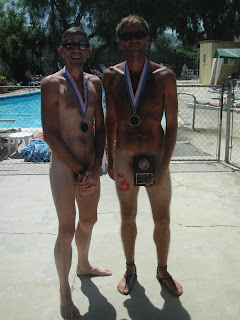 Eric Clifton and I

Pretty classy huh?
We were at a nudist resort, might as well document the day a ridiculous photo.

After the race they had a short awards ceremony.  They opened up the bar, I grabbed a beer and then went for a short hike. 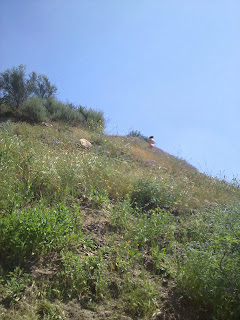 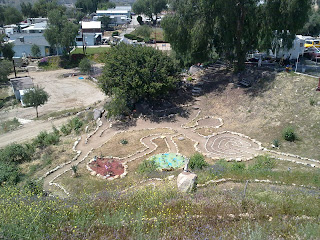 View back down
It was a tough path to navigate. 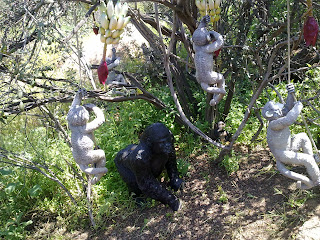 At places like this it's easy to go primal. 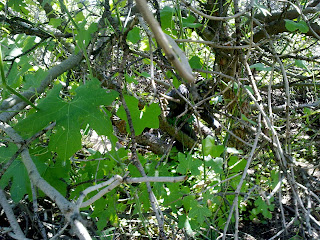 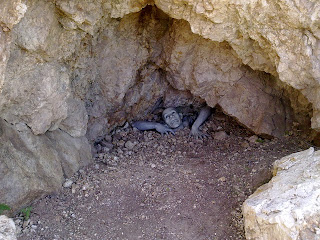 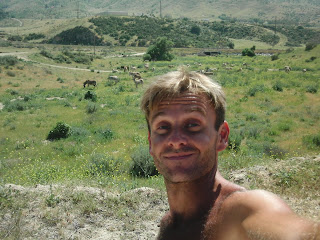 I was even lucky enough to come across a herd of wild burro's.  They were well aware of my presence, I was on their land and although I wanted to go say hi  I let them be. 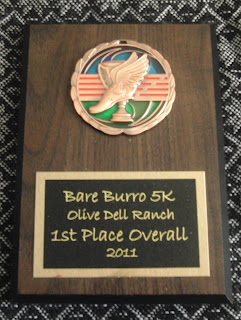 I'd prefer the award to have some naked people but it is kind of cool that it has a foot in sandals. 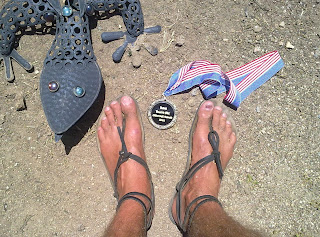 Everyone I met at the Olive Dell Ranch was really nice!  When you shed your clothes you get  rid of the pretentiousness that we all carry  (some more than others)     Everyone is defenseless.  And when you let your guard down  It's easier to embrace the kindness and positive energy that unites us.

I think I could of put that more eloquently but I hope you get may drift.

The whole day was a great experience and I think everyone could benefit from shedding their inhibitions once in awhile.

I hope to do Bare to Breakers next year. 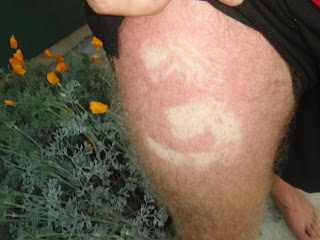 In 2012 I came back to defend my title
Here is the race report.
Posted by Bourbonfeet at 8:39 PM