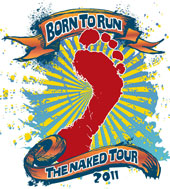 The Naked Tour.
Los Angeles
You weren't born broken.Running isn’t a perilous punishment-for-pizza.Everything you need, you had the day you were born.That’s the inspiration behind The Naked Tour, a nationwide celebration of running’s bare essentials to coincide with the paperback release of Born to Run

.
I don't like driving  my car to go running.  I usually only do this on race day.
(Currently I'm trying to run more miles than I drive and only fill up the gas tank once a month.)
I really didnt want to drive 50 miles for a 5 mile run but this was an opportunity I wasn't gonna miss.

It didn't start till 1p.m. meaning I could go about my normal business in the morning
I got up a little early and hit  the sand for a fast 1 hour run.
Sunday  is my Disc golf day and the naked tour turned out to be about 3 miles from From Chavez Ridge  Disc golf course (directly above Dodgeer Stadium)  The course plays on the side of hill with a bunch of trees and tall weeds growing evreywhere. I had an hour to kill so I decided to jog a few rounds barefoot.
(get my feet warmed up for some trail running)
I played pretty crappy the first round and then shot 9 shots better the second.
On to the event.
I expected  about 20 or 30 people to show up.  Boy was was I wrong. It was a freaking circus!  As I parked my car about 3 blocks aways I saw all kinds of people walking down the street in their funky minimalist shoes, sadly almost nobody was barefoot.

I brought my Luna Equus sandal's with me just in case someone wanted to check them out, but today I decided to take
Ziggy Marley's 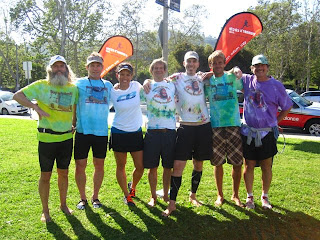 A Hippie in shoes is no Hippie at all.
Barefoot Ken bob was there his book Barefoot Running Step by Step

had just come out and he was stoked to show it off.  I was stoked to order it from amazon when I got home for only $12 (it's a giant color book) 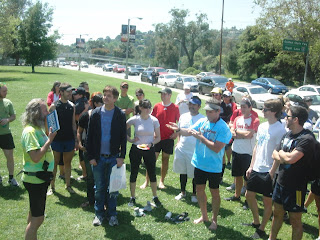 Christopher McDougall was running late so Ken bob and his coauthor Roy did some stand up comedy to help pass the time
I just got it in the mail yesterday.  I'm about 60 pages in and totally dig it. 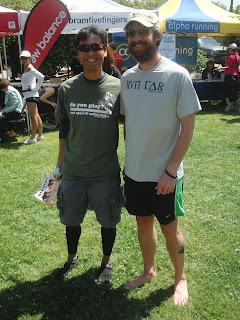 Ngoc and Shacky
Almost immediately I ran into some familiar faces from San Diego.  Which made the trip worth while right off the bat
At least a few hundred people showed up for the event, with about 15 or so barefooter's another 15 in Luna Sandals (sweet) and maybe 75 to 100 in Vibram Five Fingers

.  The rest of the group seemed to be wearing New Balance mt 101's or Minimus

.
Everyone seemed pretty excited about this whole Minimalistic approach that the book Born to Run

(now in paperback) Has spawned.  I finally bought a copy of the book for my mom to read which I brought with me to have signed 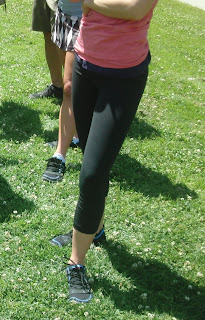 I was overwhelmed checking out all the different footwear people were wearing.  At one point I walked up to this cute girl to take a picture of her shoes  (Dumbass)  she seemed bummed I didn't care to photograph her pretty face.
(I was totally oblivious at the time.)
I need to stop having such a one track mind and start thinking about sex more often. :)

I met a bunch of really cool people and received many a kind word about my blog.  People I once only new in the world of social media I now consider friends in the real world as well. 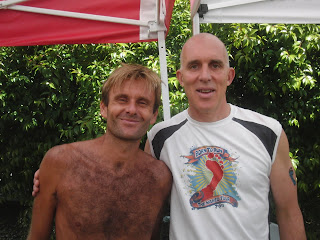 Christopher McDougall and I
After  a short timeMcDougall arrived along with Scott Jurek
It was good to finally meet.  We didn't get to chat that long but I good vibe from the dude.  Hopefully next time we will get to sit down and drink some ale. 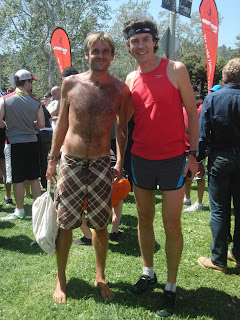 Scott Jurek and I
I had never met Scott before and look forward to racing against him in the future.  I told him he should run in the Hermosa 24 and that wouldn't need to train for it because  (you know) running in the soft sand easy. 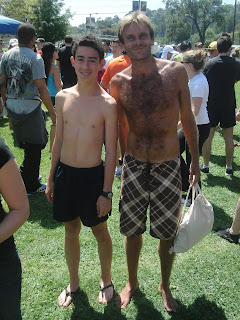 Probally the coolest dude there

.  The kid also is planning on doing the Hermosa 24 and one of his assistant track coaches at school is my good buddy Dan Westergaard. (small world)  He was also one of few people to do the 5 mile run barefoot.  I was impressed and I'm sure he'll do well at P.V.
Enough with the chit chat  it was now time to go for 5 mile stroll up to the top of Griffith Park. 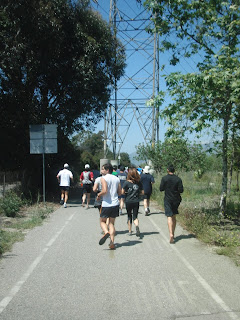 Stampede down the bike path
It was a short  jog   before hitting the trail. 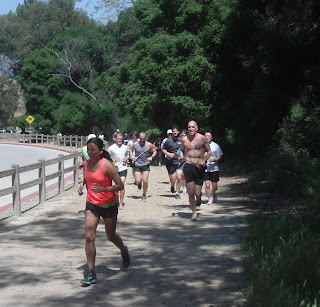 McDougall and others enjoying the run. 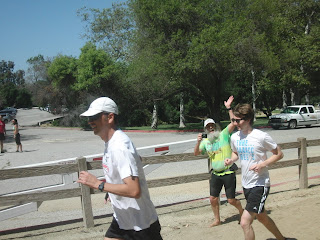 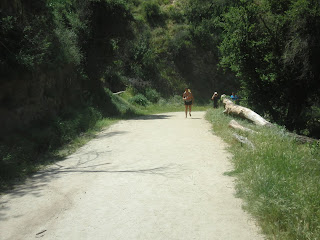 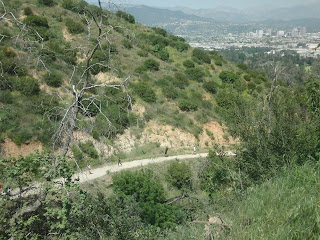 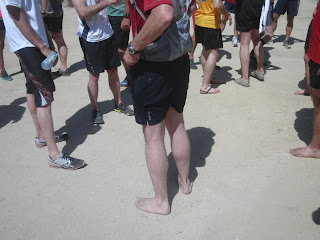 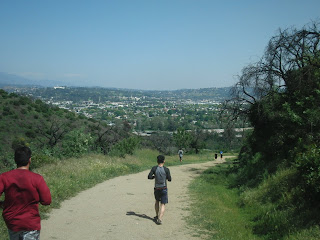 Nice view as we descended 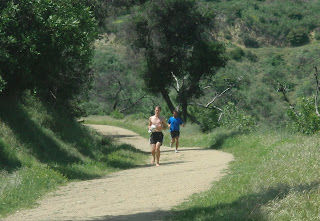 Barefoot descent
Map of the run 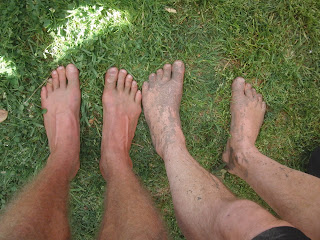 Ken Bob and I
Can you guess who's who?
One of the best things about running barefoot is getting to feel all the textures of the Earth.  If there's mud you don't avoid it! You embrace it!  Ken Bob's years of experience has provided him with a keen eye towards finding the simple joys in life.
"like getting dirty" 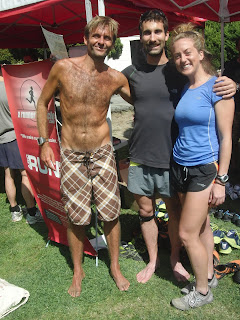 Dom and Katie
A few ultra running friends showed up for the event.  Dom even got me to try on a pair of New Balance Minimus's

(which I would really like if they were free) 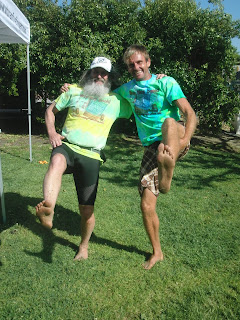 Life is Good.
I had a great time at the event and the Born to Run

Naked Tour seemed to be a big hit.   Thank you to everyone who showed up, helped out and made me smile.
Next Up
Friday and Saturday
Ragnar Relay
I'm running for Mickey's Winner's and slated for around 30 miles
if I have any juice left in my legs
Sunday
Bare Burro 5k
Time to really get naked and run
Posted by Bourbonfeet at 1:48 PM