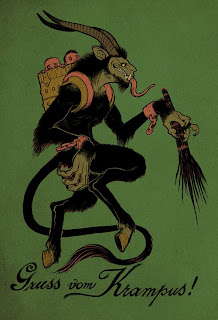 Krampus
More on this dude at the end of the post
Last week the weather was beautiful I was testing my limits and getting a little ahead myself. I strained my achilles a bit which forced my to stop running,  (at least for a few days) something my sore foot needed as well. The Manhattan Beach Yule tide 5k was Scheduled for Saturday the 18th on the beach and I really wanted run in it .  I was optimistic but I had to be realistic.  I had not run a fast mile in over 2 and half months and did not know if I was ready.  My body feels strong and steady but I wasn't sure If was ready to be fast. 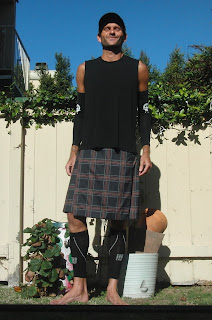 and my USTAF hat
Side note:
I posted this on Facebook and got like 10 dude friends saying they dug the pic and zero response from the ladies lol.
Thursday 2 days before the race I got all dressed up in my running gear to help pump myself up.  I decided to hit the beach (hard sand) and try running a 5k at about 75% max speed to see where I was at.  From the very first steps speed and strength felt effortless but unfortunately pain in my foot was very evident.  I ran my first 2.5k faster than I expected at a 6 min pace. When I turned around to head back I hit a strong head/cross wind. (this was my first time running fast in the Kilt)  Lucky for me no paparazzi was around for when I looked down I saw my willie looking back at me.  Time to slow down.  The kilt preforms well when running slower than a  7 minute mile and I could careless (personally I have no shame) about exposing myself, however I do not wish offend anybody and for legal reasons if I race in an urban environment I shall where a loin underneath. I finished my run with my foot not feeling so good.  As soon as I stopped the pain was gone and optimism was creeping  back into my brain.  I headed to the sauna for a couple hours to figure out what was going on with my body.  I told myself if the foot felt good the next morning I would sign for the race, which I really thought it would.
"doh"

Friday morning my foot was not happy.  No doubt I could bare the pain, run the race and maybe win. That would definitely set me back in my recovery, so once again I am on the sidelines.  I should probably have my own set of pompom's by now.
Or better yet
a 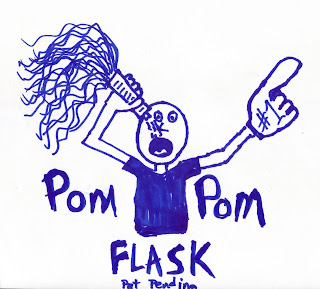 My team spirit is "Bourbon"

Even though I wasn't running I was excited to go root my sister on.  It was poring rain about an hour before the start but by the time the horn blew it there were just a few sprinkles coming down. 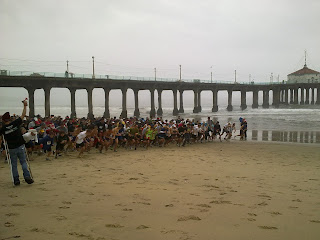 Starting line Yultide 5k 12/18/2010 Manhattan Beach
I was a little bummed to see  most of the field  wearing shoes. Because of the rain the storm drains were flowing like mad into the ocean my sister told me that a few times she had to go threw water 12 to 16 inches deep.  I bet that made all the barefooters even happier with their choice . 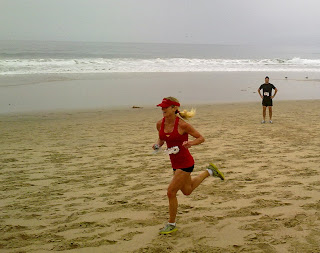 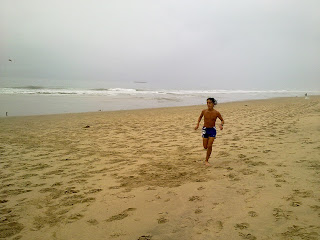 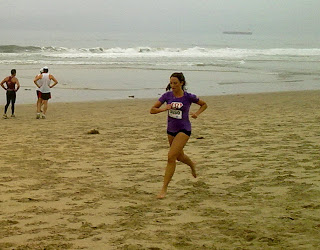 I'm not sure if she was the 1st place finishing barefoot girl but she was the cutest so I took her picture :) 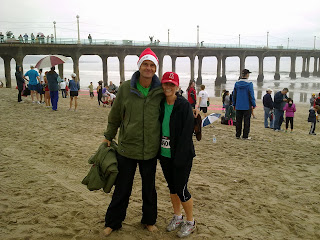 My sister and her cheer leading gimp brother
After the race my sister was dieing for water.  Instead of being helpful by having water ready for her, I was oblivious and spend the entire race shooting the shit with race director, then I made her pose for a picture before she could get a drink. (she has already given me my X-mas present so no need to suck up, lol)  She ran a good race, improving on her previous time and I was proud of her.
Out of the 500 or so people who signed up for the race I would say less than 300 braved the weather and showed up.  The race director is an ex Olympian who coaches track up in Palos Verdes.  5 of the top 6 runners are on his track team including the winner, a 16 year old kid who finished in 16:40.
Sunday
The weather still stunk in Southern California.  I thought about playing some disc golf in the rain but was not that motivated.  I hit the gym in the morning for a few hours and then it was off to television city to go watch the Survivor season finale be filmed live. 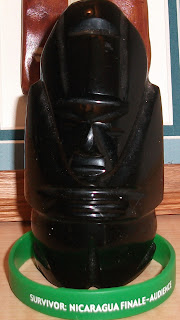 I been a fan of the show for years and my buddy mine knows some people who hooked us up with good seats. Maybe next year I'll be sitting on the stage. 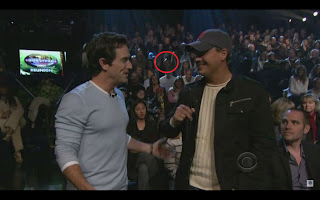 That's me lurking in the shadows
It was interesting watching the cast of Survivor on the stage. You could tell most of them were pretty nervous and the reunion show developed into a train wreck of strange moments and inappropriate comments. Thus proving that I would fit into the mix perfectly.
Monday, Tuesday,Wednesday
The weather has continued to stink, I have been hitting the dreadmill each day and spending a lot of time in the sauna I finished my X-mas shopping and have been cooking a lot a food.  Blah blah blah,
I had planned on writing a bunch more crap, but the sun is starting to shine through my bedroom window for the first time in a week.  Thus I am going to end my post short and get my ass to the beach for  a run. 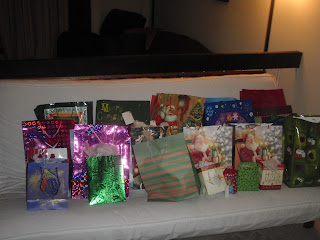 Presents
I suck at wrapping presents and love the convenience of gift bags.  What I love even more is that my mom by them by the truck load doesn't complain when I take 20 or 30 of  them. 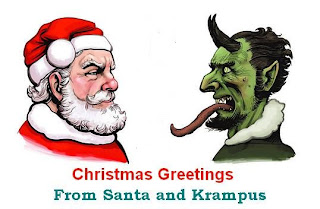 "Santa" & "Claus" AKA Krampus
Attention Children be nice to your mom dad.  Not only will Saint Nick not bring you any presents if you are bad.  He may send his good buddy Krampus after you. 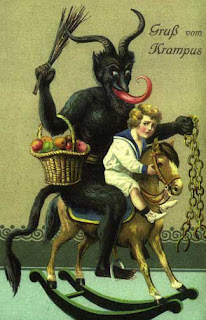 First he enslaves you, then he licks you, tosses you in a basket and... ultimately murders you. 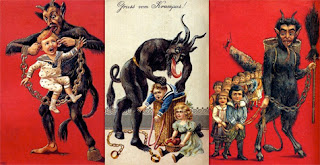 Happy Holidays everyone
Posted by Bourbonfeet at 9:18 AM