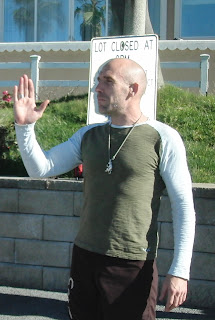 Last Friday morning Barefoot Ted came to town.  I have never spent anytime with Ted in person.  We met briefly a few years ago at the 2008 Orange Curtain 100k.  About a year ago I started exchanging a few emails with Ted about barefoot and Vibram running.  His advice was very helpful and sincere. Over the summer I paced Badwater in a pair of Ted's Luna Sandal's, they worked so well I decided to start racing in them.  For the past few months I have had numerous engaging phone conversations with Ted and am proud to call him a friend.  I thought I had a pretty good understanding of his philosophies and was excited to see how he would share his knowledge with a group barefoot runners. 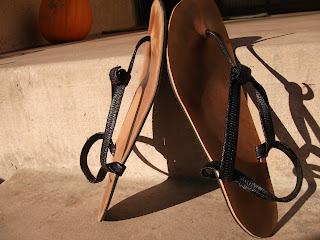 Luna Equus
The introduction to Barefoot running clinic was held on my home turf  near the beach in EL Porto at the North end of Manhattan Beach.  Ted picked me up about an hour before the clinic and he came bearing a gift.  A new Prototype super thin pair of Luna sandals made with cordovan leather and new "Go" Straps that slip on your feet securely only need to be tied once.   I slipped off my Leadville's,  slipped on the cordovans and they have been the only thing on my feet ever since.
We grabbed a quick bite to eat on the way to way to the beach.  While at the restaurant the cute waitress complimented us on our kick ass sandals.  Ted was eating it up (He was more stoked about the compliment, I was more stoked about the girl.)
The running clinic 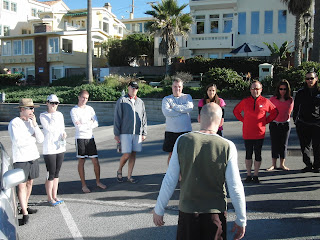 .  One thing I really respect about Ted's view is his openness to other peoples opinions.  It's not his way or the Highway.  Ted encouraged the group to go barefoot but was totally fine with anyone who wished to keep their Vibrams on or even the few people who arrived wearing running shoes.
Among  the people that showed up were world record barefoot sand runner Christian Burke, my good buddy Justin Dilg,  my daily mile friend Michael Blanchard and my sister even brought my nephews (they were just there to meet Ted and play on beach but they were barefoot) 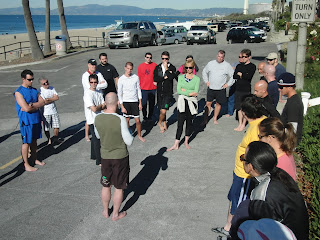 Ted is a beautiful story teller.  Poise and structure? Nope.  He speaks with a passion and charisma that is captivating.  He brings a youthful excitement to what he speaks about.  (kind of like a kid telling you all about his first trip on a roller coaster.) Ted's message is simple  "Listen to your body!"  "Quick short cadence" "Good posture" "Land soft" and "Do not strike with your heal." 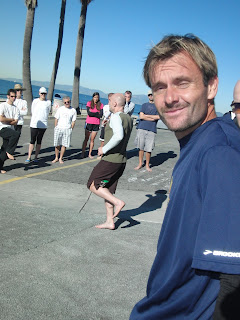 I'd been up since 4 a.m. and it showed in my eyes.  Ted on the other hand was dancing around like the asphalt was on fire.  Speaking of dancing (nice transition huh) Ted talked about Importance of dance  and how running and dancing are very much the same.
Sorry about my crappy video footage however Ted's footage looks fine (get it "footage") 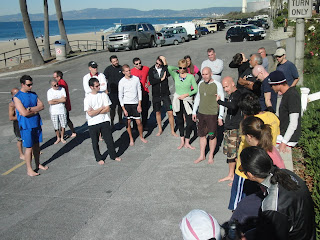 Christian Burke sucking up to Ted about how awesome his form was. 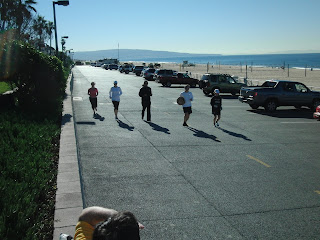 We all  ran a  little bit while applying the principles Ted had taught us.  Most everyone pretty much got it, although there was still quite a bit of variation between our forms. 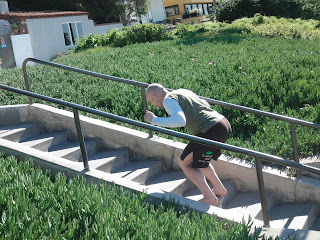 A big part about Ted's spiel was getting back to natural movements such as jumping.  In our paved modern society we have lost touch with many of the motions our bodies were designed accomplish. 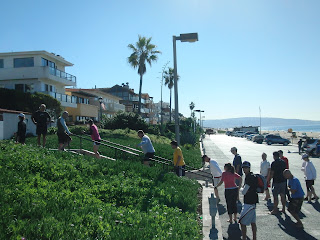 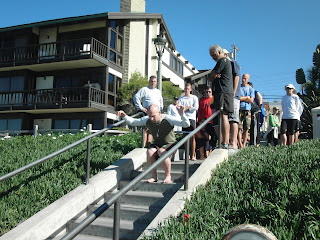 What goes up must come back down.
Just before this shot was taken, Ted showed off his dexterity by jumping up on the hand rail and walked  down it for a few steps.  (somewhere there is Circus that could really use his skills) I was impressed. 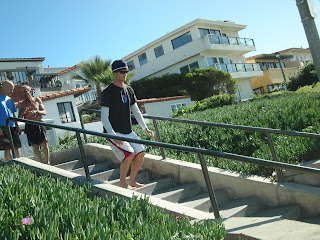 My buddy Justin tore up his knee while Lifeguarding over the summer he's doing his best to execute good form.  In the background you can See Christian Burke Talking with one of Ted's buddies a 70 year trail runner who showed up dressed for wedding. 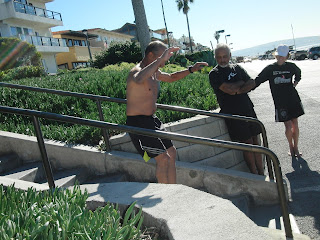 Christian had loaned him some board shorts and he fit right in. 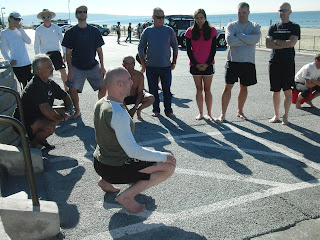 Squatting is another natural movement.
My buddy Justin was a bit concerned about us pissing off the local surfers since we were running around in Their parking lot.  He told me that witnessed one guy get out of car leering over at us.  The man began to listen what Ted had to say and after a few minutes, just before parting ways ways towards the sea he said out loud to himself "That guys on to something." 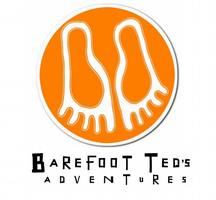 Schedule a lesson
The guy was right Ted is on to something and if you get a chance to either participate in one of his one on one workshops or  his intro to barefoot running clinics take it. A paradigm shift in how we look at running our bodies and how we live our lives is under way.  Ted gets it and although you don't have to agree with everything he has to say  I believe that anyone can benefit from his message he has to offer. 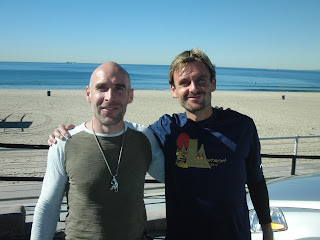 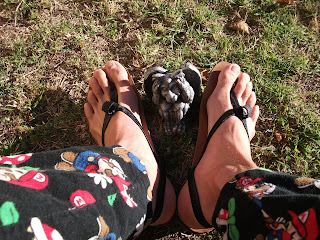 As I mentioned earlier these sandals have been on my feet for the last week now.  The new straps which I am calling "Go straps" (until Ted comes up with a name) allow for the user to instantly put them on his or her feet and go.  This is finally a perfect everyday sandal I could recommend to anyone from runners to even my mom.    One of the biggest set backs Luna sandals have had towards mass market appeal is the amount of time it took to tie the sandal traditionally. . We live in a society of instant gratification.  Most people don't want to have to think when they put on their shoes they want them slip on and slip off instantly.   However I find it nice to slow down every once in awhile.  I like to take time and care lacing up my sandal exactly right, it makes them  feel much more like an extension of my body and that is what makes them wonderful to run in.  It's nice to now have the option between "go and "slow"  I'm pretty sure I will continue to race using tradition lacing method but  for my everyday life if I'm not barefoot you will probably see me wearing my Luna Go's.
Posted by Bourbonfeet at 9:28 AM