July third I went for a Nice easy 8 miles soft sand run.  The Sun was shining the body felt good, and I was excited about the upcoming Hermosa Ironman.  My buddy Justin was Life Guarding that day and I planned on stopping by so that we could talk over out plans for the 4th.  The beach was packed and and I couldn't him at any of his usual towers.  I got a call  later that night from Justin,  he had wrecked his knee while working (probably saving 100's of kids from a shark attack) my other preschool buddy Tony would also not be participating this year.  I was on my own, time to make new friends an d avoid getting puked on by my rivals.

I can't take my dog to the beach but they can have horses.  No fair!
(Yes I did step in horse crap on the strand.) Where are their trash bags?
- 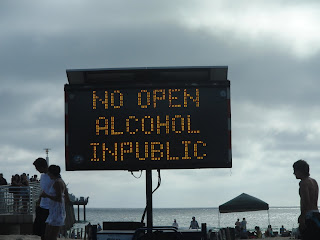 On the 4th of July fines for drinking in public are tripled.  Alcohol is strictly forbidden on the beach and strand.  The Hermosa Ironman raises money for charity,  we clean up after our selfs and are drunk and finished by noon. What happens to us the rest of the day that's another story.  With anywhere between 300 to 500 competitors the police graciously let the event continue.  No arrests and no riots. 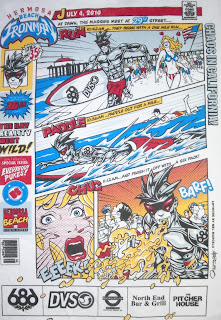 Back of the T-shirt pretty much sums up the event
I woke up early on the 4th and was ready to go.  The plan was to meet at Justin's near the beach and carry our boards down to the starting line.  Their were about 10 people at Justin's when I arrived at 8:30 in the morning I don't think any of them had gotten more than a couple hours of sleep from the partying the night before.  They were all boozing it up pretty good.  I wanted to join in but figured it would be a long day and wanted to maintain some composure for the event.  We hung out for a bit waiting for some other Ironmen to show up.  My blood was already pumping and I was to go. 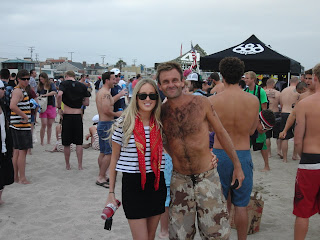 making friends before the event 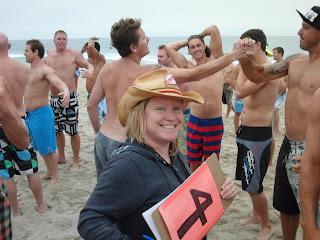 My Judge
We ended up getting a ride down to the beach about 1/2 hour before the event.  The weather was dreary.  I was excited about event.  I knew a had a shot at winning and was really stocked to be put in a group with past champions.  This was the first year I would know where I stood and if I was really in contention win.  Last year I didn't even have a a real judge when the event had started.  This time I got exactly who I wanted local party animal, super judge extraordinaire and my good friend Christi McCaverty.  No excuses, if I the best I would soon find out.  Amongst the other competitors in my group were Chris Brown (the perennial favorite) and  Annie Seawright (a girl that puts nearly every man to shame).  Justin decided to give it a go but would skip the running portion, also in our group was Justin's friend Reynold who would be competing for the first time.  I shook hands with the competition got my Natural Lights in ready position and eagerly awaited the start of the national anthem to be sung by former Hermosa Mayor Bergie.

While the Star Spangled banner payed tribute to America the Ironmen gathered at the starting line.  For the first time nobody jumped the gun early.  My strategy was to get in front be the first one done with the mile and first one in the water for the paddle.  I jumped out to an early lead about 50 feet in front of the next guy and a few hundred feet in front of the pack.   I had never lead the pack in this race before and was not entirely sure where we were supposed to turn back.  I didn't want to waste time and energy going to far.  I slowed a bit to ask the guy behind me. He had no clue and neither did the guy behind him.  The pack was catching up and I had relinquishment my lead.  By the time we figured it out I was in a group of about 10 decent runners.  I stepped it up a bit took the lead and sprinted to my Board.  On the way to the board I passed Justin who was hobbling along ready to start his paddle.  Like last year Justin let me use one his giant long boards, while he used my brown foam p.o.s.  Where you enter the water is up to each competitors discretion, it's kinda based on where your board is located.  All the competitors boards are lined along the wall of the strand and you can only fit so many in that confined space.  Most competitors take some liberty cutting off some of the paddle by entering the water farther North.  I think this practice is generally accepted and  just part of the race.
I got my board and B-lined it straight to the water.  First in, things were looking good,  looking good except for the fact that I still had to paddle a mile.  If you've ever seen my arms you know that they are as big as a totally ripped eight your old girl.  Time to grind it out.  After a about a minute of paddling I noticed a bunch of competitors entering the water about a block North of me.  I had that choice and didn't make it.  In hind sight maybe I should have.  I no longer had the lead and needed to keep from falling to far behind.  I was doing my best.  My form was quite atrocious but steady it didn't waver much and kept trucking along.  By the time I got to the turn around I was in about 30th place.  I was faster than the year before but so was the competition.  Justin once again passed me on my crappy  inferior board.  I noticed Annie Seawright also effortlessly paddle past me.  Having a 1 minute lead after a 6 minute run doesn't mean much when the paddle takes 15 to 20 minutes.  I have respect for all the surfers that whooped me in the water  (if only it was a 10 mile run 1 mile paddle).
By the time I reached my judge, their was a huge crowd.  I had hoped to make up ground in the drinking but alas, I was too late.  Chris Brown was just finishing his sixth beer by the time I opened my first, and another dude in our group was almost done with his fifth.  Rules of Ironman state you must hold your beer down for twenty minutes.  There was still hope but my chances were slim.  I drank at an unprecedented pace. 2 minutes and 22 seconds later my beers were gone.  I had always envisioned 3 minutes 30 seconds as a perfect time and I had shattered that mark. I doubt anyone in the event had drank faster.  Chis Brown is the best he was not gonna puke.  The other guy in our group was starting to lose it, he pulled over to the side, he bend over to puke but all that came out was a little foam,  not enough to warranty disqualification. Justin was still drinking and ended up finishing his beers in about 6 minutes.  Annie was getting them down pretty good we rooted her on as she closed in on the title. 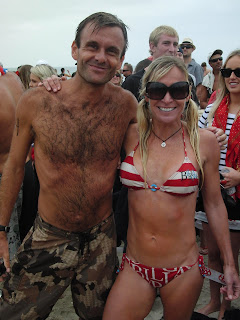 So here I stand wet and drunk at 10:30 in the morning on cold balmy forth of July.  Freezing my ass off defeated in competition and there's no place I'd rather be. 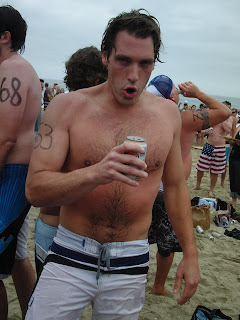 My buddy Reynold a swimmer by trade got brutalized by the paddle but made up some good time pounding his six pack.  All in all it was a good performance by the rookie 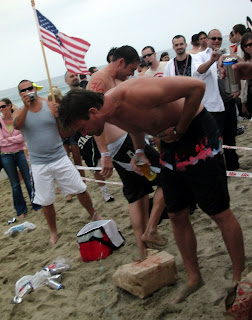 Not everyone is fortunate to hold their beer down.  Some even pride themselves of their ability to let it go.  If you look carefully his puke is blue. 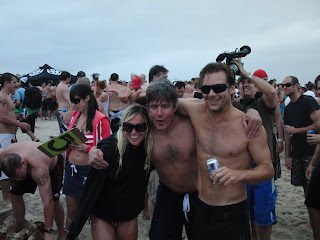 1st place Woman Annie Seawright, former Mayor Bergie, and the winner Chris Brown
For the first time the event was sponsored by some local vendors, that meant prizes for the winners.  This year their was a lot of pressure by the police to get things over with quickly.  In years past they had announced the top 10 but this time they would only aknowledge the top 4.  It wasn't very long before they called my name worse than I expected 4th place, some guy from another judge had also beaten me.  I would have been more upset if  I had thought I may had won, and lost to someone from another group like last year.  My overall time felt much quicker than 2009 in which I got second.  I ran faster than anyone and my drinking was near perfection. My philosophies were arrogant. I decided not to train at paddling.  I thought I could get by on my drinking and running alone. I was wrong and deserved to lose. Oh well.  The competition was stronger and I put up a good fight.  If I wanna win I must train on the board.  I still feel that this would take away from the integrity of the event but my philosophies may change by next year. 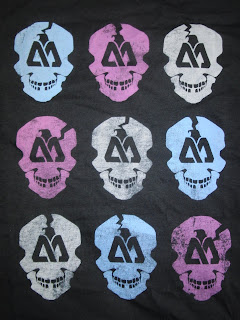 My prize, a long sleeved shirt with skulls. Sure why not I like skulls,  who doesn't?
All that was left was the celebratory mosh pit.  This year the band was pretty damn good.    They played a few of my all time South Bay favorites.  "I'm not a loser" by the Descendants and "Bro Hymn"  by Pennywise
Slow motion pit video
Filmed with Casio high speed cheap ass camera 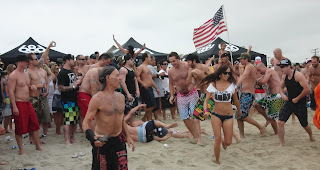 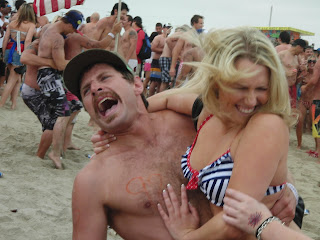 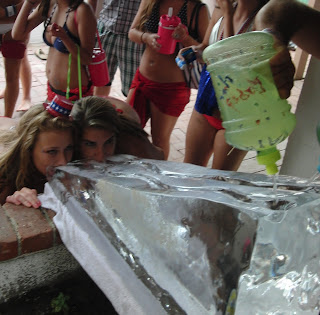 The weather was still pretty cold.  We had to get the boards back to Justin's house.   We got detoured by a house party for about an hour along the way.
Eventually we made it to Justin's had a few more drinks.  Our 4th of July journey was just beginning, but something was missing. 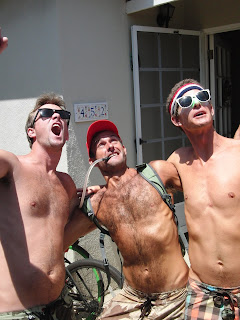 Fire in th Sky at Dawson's house
On our way back to the beach we found the missing element to 4th of July perfection.  The sun had arrived and not a minute to soon.  I had my Hydration pack properly stocked with 100oz of vodka juice and Ice.  The day had just begun and  lascivious debauchery was on the horizon. 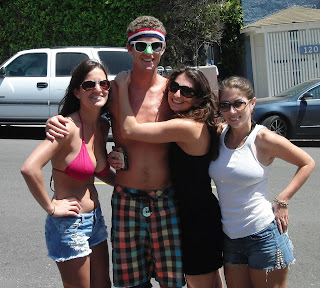 Pimping aint easy when your crippled.  Justin kept his spirits high and made the best of his situation. 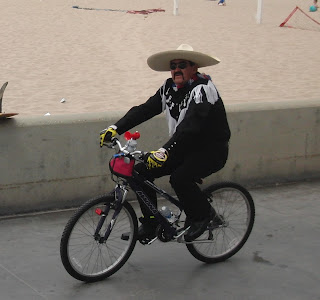 Nothing screams out 4th of July quite like a Mariachi on a mountain bike.  "Viva los America"

As much as I may disagree with my government at times.  I really do love this country. On days like the this I feel honored to be an American. 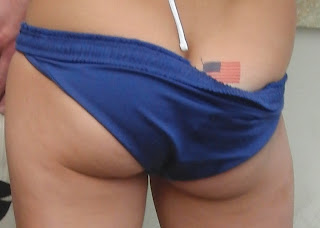 The End
Posted by Bourbonfeet at 1:24 PM