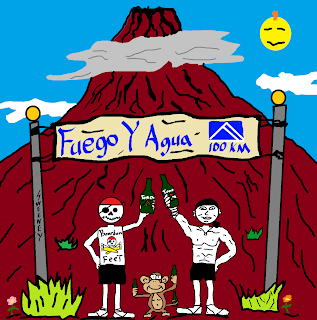 Cheers to the Good Life!
(note to the readers of this blog:  the monkey supplied his own beer, he was totally of legal age and promised not operate any heavy machinery but I could of sworn I saw him zipping down the street on a Solowheel?) 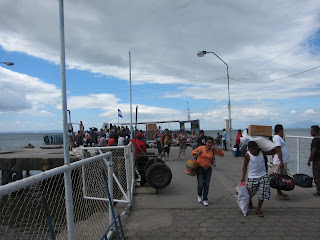 I think this is the right island? 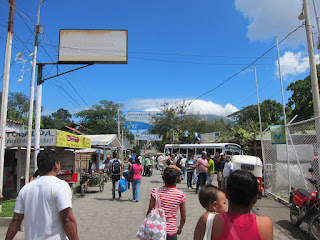 As soon as we stepped off the docks it seemed that everybody wanted to be our friend (or at least a friend of our wallets) "Can I help you" In the tone of Speedy Gozalez's Cousin Slowpoke Rodriguez, a scooter renter said to me. "No Gracias."  "Yeerr baack pack eez open." ???  "doh" I guess he could help me after all
"Thanks dude."
:) 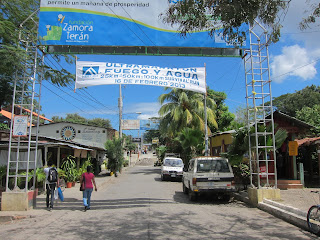 Well looky there "Fuego Y Agua 100km"
I think we are in the right place.
Not really knowing what to expect Tyler and I asked the race director If he new a good place to stay.  He said there was a possibility of squishing us in in the Elites hotel? But neither Tyler or I are very squishy and even less Elite.
"Do you know of a place for a couple of Lumpy Lunatics?" 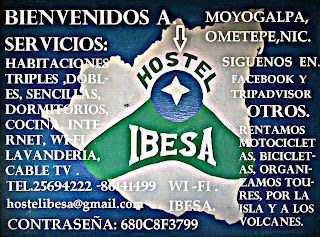 Hostel Ibesa $7 a person per night, It got good reviews on trip advisor and the price was right.  The family that ran the place were super nice but the room was tiny and you could stand on your bed and loo over into the neighbors room.  There was a kid floating around the place about 14 years old who spoke a bit of English.  I told him that we were running in the race.  "He said that I should run in the 100km and that Tyler should do the 25km lol.
Tyler gave him a friendly "while I otta?" Look along with a smile.
(they would settle their differences in a future blog post) 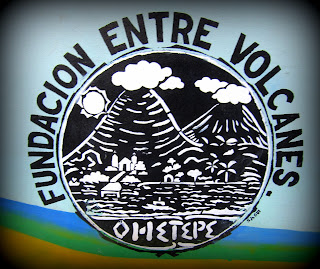 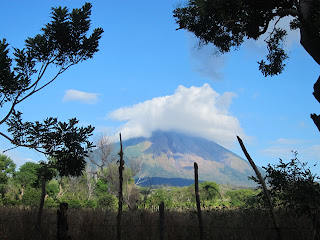 There's that Volcano again.  Don't worry I was totally safe it hasn't had any eruptions since way back in 2010 when people were told to evacuate the Island and I would never say or do anything blasphemous enough to upset the gods??? 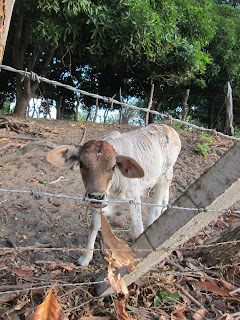 I have lived my whole life it a rather suburban environment and it was pretty cool to see chickens, pigs, cows and horses wandering around. 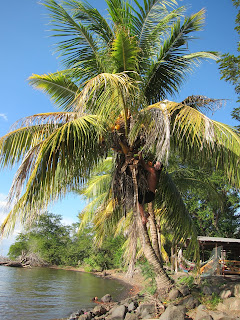 After hiking for a few miles we found a nice beach,went for swim in Lake Nicaragua and had a couple of free drinks thanks to Tyler's monkey skills.  The sand had real interesting consistency once you walked out about 80 feet into the water about knee high the sand became much more viscous and you feet would start sinking. It was both kind of cool and kind of gross.  I'm glad we had the lake to swim in but I missing the saltiness of the ocean back home. Tyler was a afraid he was gonna get eaten by bull sharks but I figured they would rather eat him then me so I felt completely safe. 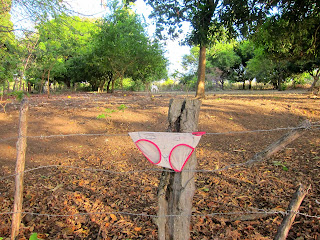 As soon as Tyler's Panties dried we headed back to town to grab a beer. 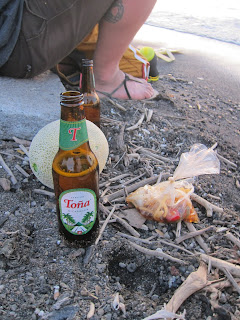 Since TONA was a sponsor of the event we figured we better purchase a couple to show are appreciation, I kept searching for avocado's but there's was none to be found anywhere? So I ended with some mystery bag of pickled produce. 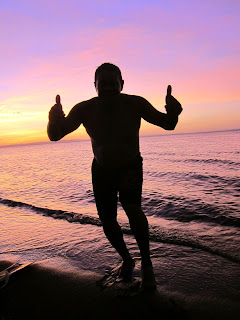 Back At the beach again we made friend with a few local drunks. 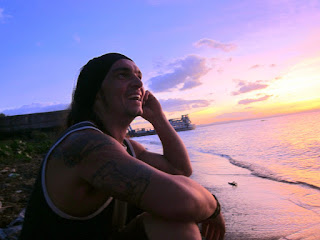 They were pretty entertaining 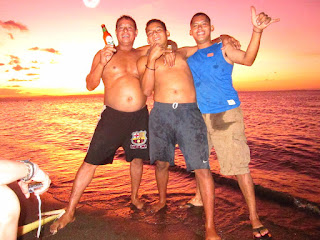 It was here that I developed  the Pat Sweeney method of making friends with drunks that don't speak English:
Chances are the dudes you are engaging have a beer belly.  Identify the most jovial fellow and then with a nice inflection of your voice point in his direction and call him "Gordo"  this will hopfully get his buddies laughing and probably him too. But just calling a dude fat is kind of mean so then you switch to a tough guy voice and do some sort bicep flex and call the same guy  "Muy guapo."
(Now that you have now proven to them that you are Idiot, they will not see you as a threat and welcome you with open arms and hopefully a bottle of cold beer)
Wallah!
You now have new friends.
I used this technique multiple times on my trip and each time it worked brilliantly.
(maybe brilliant isn't the right word to use) 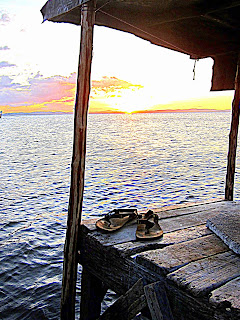 The sunset was pretty amazing and both Tyler and were rally stoked to on this Island Paradise. 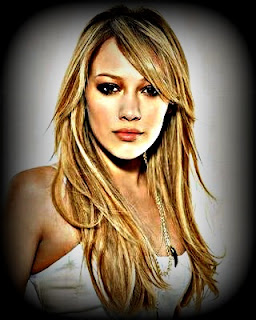 Kimmie?
I had envisioned that that I would be living off avocados and tortillas But it looked like that wasn't gonna happen. Instead we found ourselves eating a Vegan Pizza at some Italian joint (odd) and splitting an $8 bottle of Vino "high Rollers" while there we met a couple of Aussies one which was this smok'n hot girl named Kimmie  (whom Tyler and I immediately fell in love with) and lucky for us the dude she was with was not her boyfriend (Sweet) it was her boyfriend's best friend (Doh!)
Oh well, they were still cool people and they tried to convince us to move to there Hostel.
"Perhaps?" 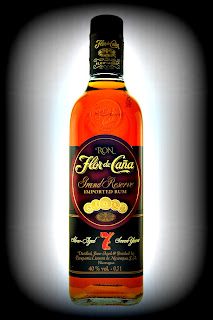 No Kimmie, but at least we had Flor to pass around after dinner.
The finest Nicaraguan rum I had ever had.
(I bet you can guess how many Nicaraguan rums I have ever had)
"Yo Ho Ho A Pirates life for Me." 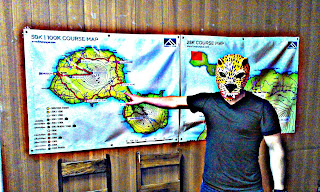 Later that night  the race Director Josue Stephens came knocking at our door. We were pretty much the first runners to arrive on the island and he was kind enough to give us a tour of the race headquarters and show us a map of the course.  He asked us if we wanted to tag along on a trip around the island the next morning with some race volunteers?
"Heck Yeah we do!!"
"We meet at 7:30 a.m." 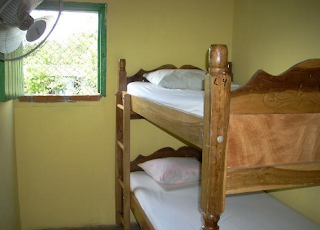 After an hour of sleep I woke up to the sound of babies being made in the room next door. Since all the rooms shared the same ceilings you couldn't help but listen in. I had the bottom bunk where it was a little quieter but (I bet Tyler's  up top eating popcorn watching the show) The couple was going at it pretty good and I almost wanted to start clapping when they finished.
"Well done strangers."
(I could have got upset about losing sleep but I'll save the getting upset for when I'm cranky old geezer.)
That wasn't even the most entertaining thing that would happen that night? 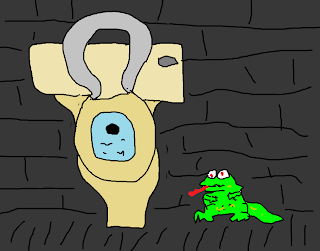 Half asleep I stumbled out of bed around 3 a.m. to  take a leak. My "ahh" of relief turned  into Shrill "EEK" (I don't think I actually said eek but I made a sound you wouldn't expect a grown man to make)  Just to the side of the toilet was the biggest toad I have seen!  (he looked just like the boss from Super Mario Bros. 2)  I wasn't really afraid but extremely surprised and rather proud of myself for having enough focus  to get all my pee in the toilet.    I'm not sure if he was awake from my scream or my excitement but I woke Tyler up to tell him.
"High five buddy!"
"We aint in Kansas anymore, hell Kansas is more wild than where I come from."

I wonder what tomorrow's gonna bring?
(sooner or later there's got to be some running?)

Posted by Bourbonfeet at 8:43 AM