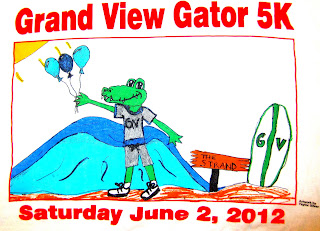 For the second year in a row I returned to my old Elementry School In Manhattan Beach for the Grand View Gator 5k.  About 1,000 people showed up to run and most of them were kids.

Last year I had accidentally signed up for two races on the same day.  I finished the Grand view race in first place and kept running passed the finish line and straight to my car so that I could get to the second race which started less than an hour after the first one had began.

This time I would take my time to enjoy the event. 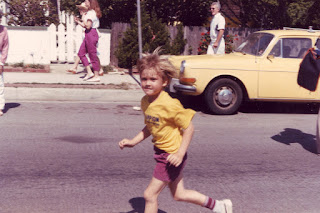 Around the age of  10 I became a fat kid.   I wasn't  lazy I was just as happy to be outside playing sports as I was to be in my room drinking soda and playing nintendo.
Did I love running ?
HA!
If you told me I had to run 3 miles I'd look at you like your were crazy. By the time I was 12  I was  5ft  tall and weighed  165lb's  (That was the largest I have ever been). My diet was horrible and I often suffered very painful intestinal pains because of it.
Currently I weigh 145lbs I am about six feet tall and eat between   3,500 to 4,500 calories a day on a vegan diet.
I guess I'm lucky some people may grow into obesity as the age.  I grew out of it.

It's makes me really happy to see  may kid's excited about running.
If races like the Grand View 5k and organizations like the 100 Mile Club  were around when I was a kid I think I would have been a much healthier child. 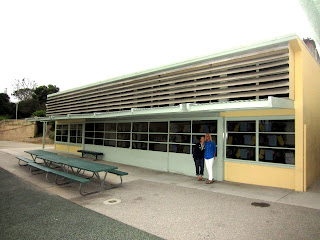 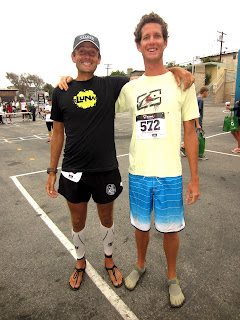 I had signed my sister up for the race but a nagging IT band problem kept her from participating but the let me transfer her entry to my buddy Justin Dilg.  I've known Justin since I was about 3 years old  he lives in Manhattan Beach just a few blocks from Grand View.   He made me smile with my teeth for this pic (something I rarely do)
We use to run together  till he blew out his knee while life guarding.  This would be his first race since going under the knife about a year ago. 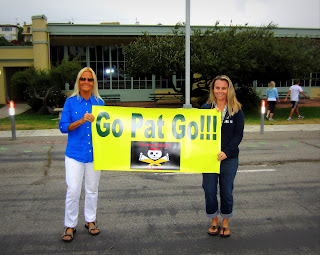 My sister surprised my with this pretty sweet banner she ordered off the web for $6.

Time to Race
I lined up next to a young scruffy kid about 22 years old wearing a Cambridge singlet. he told me he felt out of shape and was just hoping to beat 17 minutes. 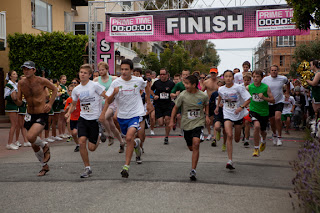 I jumped out to an early lead (what a surprise) Almost immediately the course goes down a steep hill,  I ran recklessly as my stride extended to what felt like a dozen feet per step. 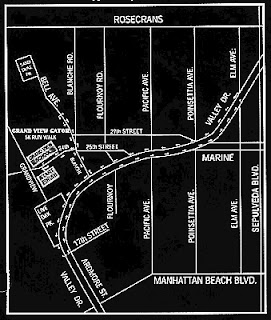 Once at the bottom I made the turn to my right and was hoping to be comfortably in the lead? Well that was not the case.  The  dude in the Cambridge singlet I was sizing up earlier was right on ass and before I knew it he was in the lead.  Hmm? I need to find my stride!  I was running decently but he was running better, at the .5 mile mark he had 100 foot lead and by the 1 mile maek as we started to climb some hills he had stretched it to at least 100 yards. 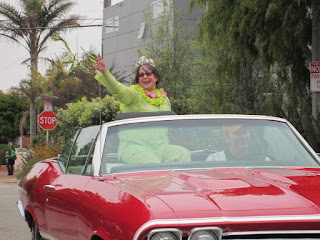 I love the Grand View 5k but htere is one thing I really hate about it and that is ridiculously stupid!  The pace vehicle is a gas guzzling 70's Muscle car.  If you are running anywhere close to the lead you must inhale it's fumes the entire time.

I was so far back It wasn't a factor but maybe it was for the guy in the lead I thought?

I was running on my home turf and received quite a few cheers from strangers who know who I was.  It helped me find another gear as we climbed up Valley drive to the second turn around  and I began to close the gap. At the turn I knew I had a chance of moving back into first.  Soon after we headed back down the hill I took the lead and hoped to put some distance between him and I.

During this stretch I overheard a young child running the opposite direction say in a bewildered voice "That kid's wearing sandals."
(I love my Luna Sandals and I love being called a kid)

Judging by the cheers from the sidelines of  "Way to guys."  I had not put too much distance on the runner behind me.  With about a 1/2 mile to go I hit the final turn around and my lead was only about 60 feet. 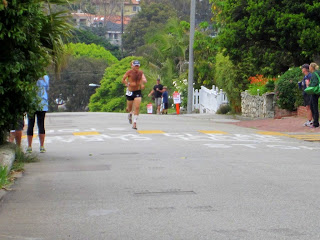 The race finishes back up the steep hill that in begins on.  I charged it hard giving it everything I had, hoping it would be enough.

As I crested the hill with about 80 feet to go, out of nowhere the other guy flew passed me.  He had timed his last second surge perfectly and all I could do was admire his strategy, as I finished in second place two steps behind him in a time of 16:45.
(about  30 seconds faster than my winning time last year) 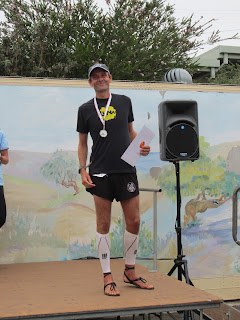 When I was younger I may have gotten upset by getting beat at last second,
but
life's to short for such negativity!
Sometimes you win sometimes you don't. I was beat by a runner who ran a better a race than I did.  I ran to the best of my abilities and was proud of my efforts.  I know my racing strategy is far from perfect.  Hopefully I shall learn from this experience and become a better runner because of it. 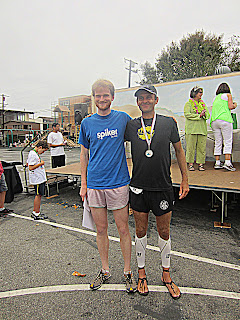 The dude who won turned out to be real nice guy.  He ran a great race  it was my privilege to shake his hand and congratulate him on his win. 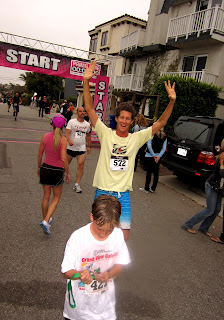 At least Justin didn't beat me
:)

All in all it was a great event.  I felt very loved by my friends, family and the community and I look forward to doing it again next year 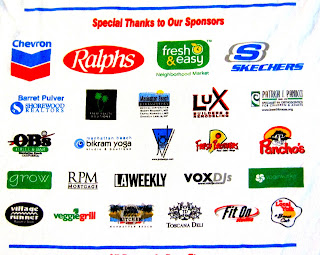 Thank you to all the volunteers, and sponsors for making it happen.