The nice thing about writing a race report about a 1mile run is that is that there's a lot less crap to cover.  However referring to it as a1mile race makes it sound too short.  I want you metric guys to realize that 1 mile is over 160,000 centimeters!

I never ran track as a kid and have never even been to track meet.  Strangely enough I have been a member of USTAF for the last 3 years.  If you go back and look through pics of me racing I'm usually wearing on their hats.  The USTAF sponsors a few of our Ultras Southern California  under the M.U.T. division (Mountain, Ultra,Trail).   and I have even been able to pocket a couple bucks because of it.
Everyone from the USTAF  has been really good to me.  Most recently at The L.A. marathon my friend Wayne Jones was able to get me into a front runners coral at the last second.  In Southern California they seem to really care about the runners and I will continue renew my membership year after year.

Preparation?
Are you supposed to taper for a 1 mile race?  I guess fresh legs are probably a good idea.  Should you practice running fast before hand? 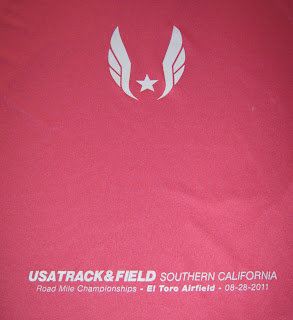 Did I do any of things NOPE! I have not timed myself at running a mile in over a year.  Sure it would have been easy to get over to the track, but the weather has been pretty nice and I had been devoting my efforts towards long slow runs at the beach. The day before the race  in and effort to impress some chick with my athletic prowess I met her ar the gym at 3 a.m. after she got off work bar tending (dumb idea).  My plan was to regain my energy with a little nap on the beach later that day.  That didn't happen I had a couple Stone's Ales and my body felt too stagnant in the sand.  I started running.  About 2 hours later  feeling parched  I saw my buddies wife standing on his parents balcony and stopped by  for quick sip of Chardonnay (hey beggars be can't choosers.)
One thing lead to another and I was home and In bed by Midnight and up the next morning  5 a.m.

You could either enter the race by age division or as an "elite runner" If you were a USTAF member and could go under 5 mins. Elite runners ran for  $$$ and division runners run for necklaces.
"I don't wear jewelry."

My race was the very last one of the morning meaning I didn't really have to be there till about 8:45 but I was eager to see what this event was all about I left my house by 6:15 and was parked at the event in Irvine by 7:00a.m.

When I jumped out of my car I Started conversing with this Dude Steve Fry  who parked next to me.  It turned out he had ran a bunch of the same Ultra's as me and I had made a new friend. He was here To break the 5:20 mark in the 50+ plus division and I wished him he best of luck.

As for Me?
My body was not giving me what I asked for out of it as of late. I think properly tuned I am in the 4:15 to 4:30 range but as of today I expected around 4:45 and would be deeply disappointed with anything around 5 minutes.

I had plenty of time to kill and thought I'd watch some of the earlier races.

My plan was always to run barefoot but I arrived wearing my Original Luna's just in case the terrain seemed too abrasive. I decided to walk the course and see just friendly it was. 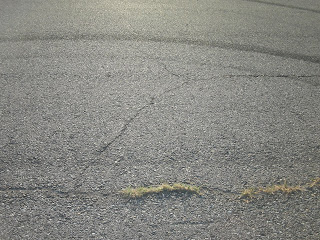 The ground was far from perfect and looked like it hadn't been paved in the past 50 years. There was a layer of rough gravel on much of the course. It would have been nice to have been swept away but I wasn't worried.

It was a great place to run barefoot! 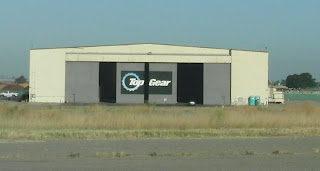 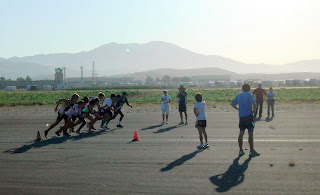 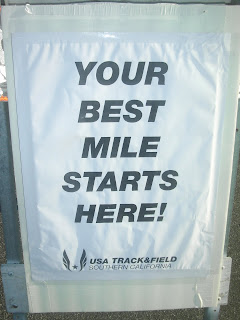 As I approached the starting line I got some funny looks from the other runners when they saw my bare feet.  They were all pretty cool about it, yet  many seemed some what bewildered by my decision.

I think 23 runners lined up for the Elite race. It looked like there were some pretty fast dudes.  There was prize money for the top few and wouldn't have been surprised if one of them broke 4 minutes.

4th from the left
The race was about five minutes from starting and I was standing around In nothing but my racing shorts. Then up strolled  my new buddy Steve he informed me that USTAF rules dictate I must wear a shirt (that sucks, but  I understand) Steve then gave me the shirt off his back so I would not be disqualified.
(What a cool dude!) 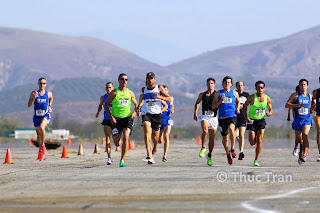 Out of the gates I jumped out in front. I had no clue how to pace myself in the mile.  I was pushing very near my top speed and held the lead through the quarter mile mark well under 1 minute.  I thought that was strange but that thought didn't last very long as the a bunch rabbits jumped  passed me soon after.

My feet were feeling great.  The gravel on the road made absolutely no difference.  I could have been running on hot coals and not felt a thing.  When your going at that speed your feet are only touching the ground for a few milliseconds each step and my heels never hit the ground.

I was Ill prepared but giving it my best go.  In this event I was deffinetly no Elite runner, sure I might have a chance of winning my age division If I chose the other race. 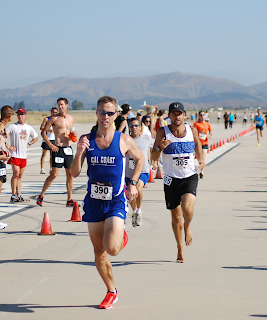 I hardly recognize myself! 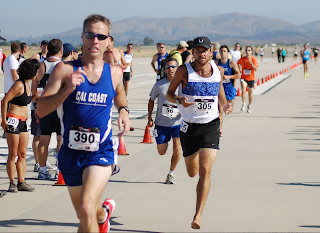 This stupid shirt Is totally adding like 30 seconds to my time!  Right?
(if there gonna make me do something I don't want want to do I'm gonna use it as a BS excuse) 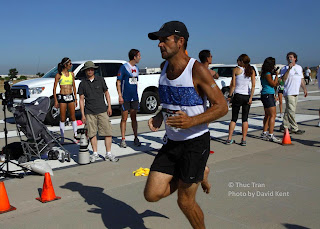 Well I ended up beating the odd's makers. I believe Vegas had the over under at 4:52 and I crossed the line at 4:43
I wasn't really thrilled or heartbroken. I ran slightly faster than my realistic expectation. Not even close to my optimistic goal but still far from humiliation..

I now have an established USTAF certified mile time.

"I set the bar pretty high for myself. But that aint saying much when doing the limbo."
(I hope that doesn't read on my tombstone)

First and second place both came in at 4:01.

Seconds after I was done I had the shirt off and was jogging back to the starting line to return it to Steve.  It was now about 9:20 a.m.  and supposedly there was a fun run mile at 9:30 (whatever that means)  I thought it would be a bunch of kids? 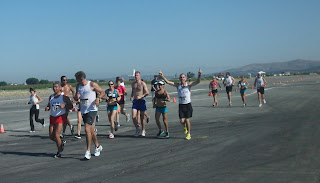 Instead it was full of the masters runner's many of which were my friends from the South Bay
.
I found Steve, thanked him and returned his extra sweaty shirt. I then ran the rest of mile with my buddy Jon Megeff who had most recently bested me at the the Hills are Alive race. 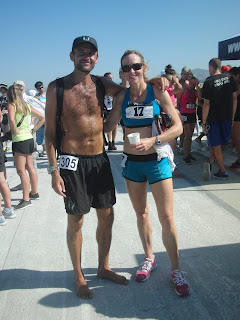 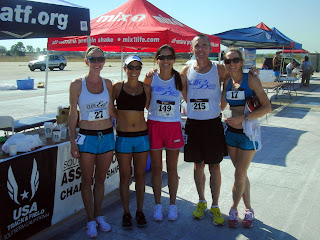 Club Ed Representing
If ever ran with a club it would be them!  (
but I think I may blow too many snot rockets for their liking.) 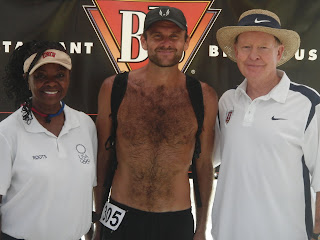 The girl on my left is a 4 time Olympian 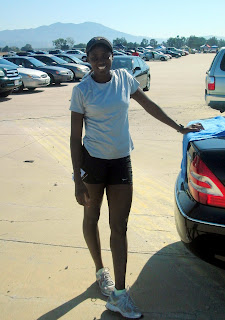 Future Olympian
As I approached my car to leave I ran across this chick.  She was a real cool chick from Liberia.  She told me that she hadn't ran since 2008 and needed to get her mile time down to kick ass 4:29 in the next few months in order to make Liberian Olympic team
(wow)
Her name was Fatimoh Muhamed and she ran a 5:20.  Maybe that means there is hope for me?
(Too bad I'm not some chick from Liberia)
Who care's I'm pulling for her to win the gold, I believe she said the 800 meter was her specialty.

It was a fun event and I was glad to be a part of it.  Thank you to the USATF especially Wayne Jones for making it it happen.  I will be back next year and I will be faster.
:)
Official results