Two weeks ago I was running on the beach barefoot in a mental funk over tribulations of the heart.  I started running angry with passion which turned into efficiency and speed,  16 miles laters I was at peace with myself realizing that I was fast.  I went on to clock 117 miles that week mostly barefoot or in Vibram fivefingers.  Somthing had clicked in my phcye I no longer identified myself as injured or gimpy as I had for the last year.  A mental road block had been broken, I could now accept the fact that  I am healthy and faster than I have ever been.  I'd been cutting down my calorie intake eating healthy and got my weight down to 142 during this time. The Palos Verdes marathon was coming up and I new I could I could set a new PR if everything came together.  This would be my first Marathon without running shoes and there were still some questions left to be answered.
Race day I did'nt sleep well.  I was up at 4 in the morning.  I ate about 1,000 calories of toast bannana's and chia seeds.  This may sound like a lot but I think it's the least I have ever eaten before a race.  I was real excited for my sister who was doing the 1/2 marathon which started  30 mins later and would run 1/2 of the there and back course.  I new if I ran fast I would see her and I was excited to root her on. 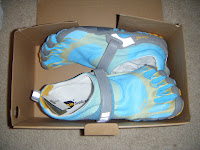 I planned on running the race in Vibram fivefingers but I did'nt know which pair.  Previosly I had ran a 5k and a 10k in "sprints and a 50k and 50 miler in Kso treks.   Last wednesday I found out the "Bikila's" were on sale.  I ordered them next day air for a $30 shipping charge (ouch).  I wear size 44 in Kso's and 45 in sprints.  I decided to order size 45 bikilas.  Thursday I did one last short 4 mile run in a pair of standard Kso's as a back up plan.  They felt great but both shoes ripped on the toe seem and I could'nt risk them completle falling apart during the race.  Well the Bikila's arrived Friday night I was very excited.  I have narrow long feet and the Bikilas were way too big for me.  I'm guessing even a size 44 will be to big too.  Reluctantly I decided to go with a fairly new pair of Sprints.  When training I don't usually wear socks but for racing I use injingi trail socks.  I decided  to go shirtless wearing some racing short shorts and some Argyle Moeben sleeves.  In my sleeve I stuffed my Zen mosaic mp3 player with speaker so I could rock out to some Voodoo Glow Skulls during the race.  The last piece of gear I used is my trusty Garmin 310xt. 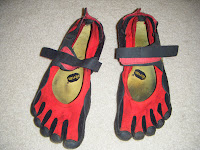 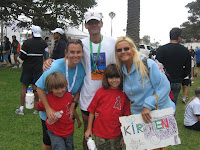 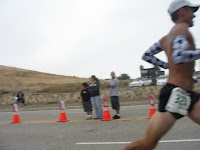 I caught my sister at mile 22 and she looked strong.  I gave her a loud cheer of support as I passed her and she gave me The cheer "Go Pat Go" my variation of Pato Banton's "Go Pato" All that was left was a sprint down Western and 1.8 mile gentle uphill to the finish line.  Earlier In the week I had dreamed about falling while running down this hill.  In reality I was flying,I looked down at my gps and it said I was running a 4:15 and I had no brakes.  Near the bottom I saw my good friend Kate running in her first 1/2 marathon I gave her a cheer and I was off.  I was on cloud nine and the race was almost over.  I just had to keep it going for another 10 minutes.  I got back into a comfortable 6:10 pace and then all of a sudden my left calf totally cramped up.  I was paying the price for  sprint downhill.  So close to the finish I had felt good for so long,  a little cramping wasn't going to stop me.  I gritted my teeth found a rhythm and accelerated towards the finish line  I thought the guy behind me may be close. I was back to a fast pace as I saw my mom and my nephews cheering me on.  For the first time in a race I raised my hands in victory as I sailed through the tape.  It took me about 100ft to stop. I was going so fast my nephew couldn't get me in the pic. I had held on and I was happy.  I figured before the race that a 2:45:00 was possible if everything went right, however realistically I wasn't even sure if I could beat 3 hours.  Well everything went right and I ended with a 2:37:14 about 17 minutes faster than I had ever ran a marathon before.  It was the 2nd fastest time run in the last 11 years of the race. 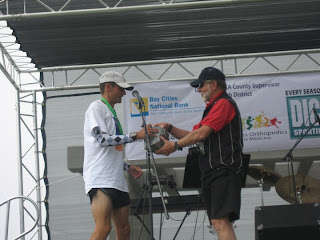 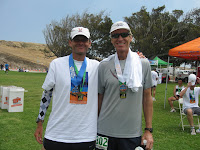 I felt good people were congratulating me left and right.  I stuck out like a sore thumb in my vibrams and my my Argyle moeben sleeves. everyone was super nice I talked with the press posed for some pictures It was my day and I was soaking it in.  I new Kate and my sister would be finishing their race soon and I was excited to cheer them on.  I also wanted to root on my competition.  A little over 11 minutes later the 2nd place finisher came in with loud cheers from myself and others   Pretty soon Kate came in finishing her first 1/2 marathon as my family her finance and I cheered her on, and then my sister came in looking real strong.  I think I was more excited for her than I was for myself. Eventually Dan  and Barefoot Jullian both came in with respectable times. 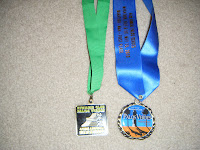 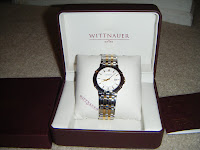 It was time to sit around and wait for awards.  Winner of the PV marathon historically gets a nice watch and I was ready for it. After the race I went to my friends for a barbecue and then off to work. 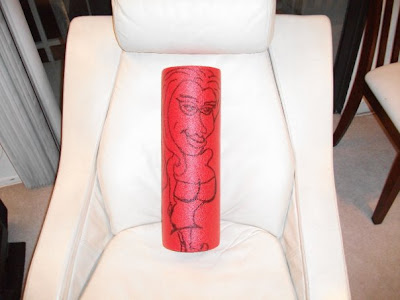 All in all it was a good day.  I capped it off by rolling around on the floor with my girlfriend "Layona" the foam roller and rewarded myself with a $26 bottle of Bourbon.  Next up the San Diego 100 miler in my KSO Trek's on 6/12/2010 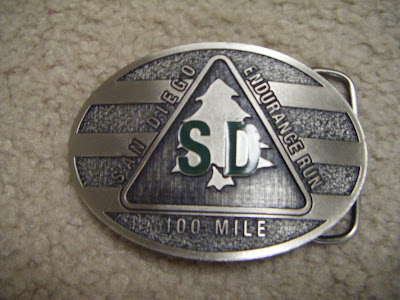 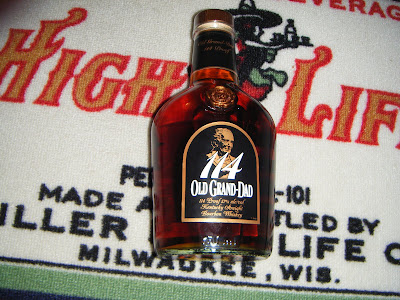 Posted by Bourbonfeet at 9:41 PM