Frustrated with this gimpy body of mine, I having been focusing more on speed rather than distance .  I would love more than anything to be running 75-100 miles a week on the beach, but my legs are not ready for that yet.  Lateral movement  has been causeing me grief while running on a hard consistant terrain feels fine.  Going out fast on pavement  has become very comfortable.  I can feel my body getting faster and I am trying to figure out how exactly to pace myself in a short distance race.  I've gone from being oone the younger guys in an Ultra to being the old guy in the front of the pack at a 5k.
Last week I had such a good time running in my first race for team Jamba Juice I decided I try find another endevour for the following weekend.  It turned out their was a 5k race  at the Rose Bowl on 6/26.   The  Race was held to raise money for the Padres organization, which does a lot to help families deal with childhood cancer.  It looked like fun to go run a loop around the Rose Bowl and good opportunity to maybe PR. 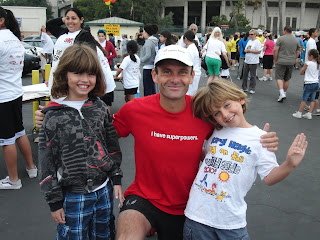 The day before the race my nephew's told me they wanted to come root me on.  I didn't expect this and always love having them around.  They helped me promote Jamba Juice rocking tattoo's on both of their cheeks. 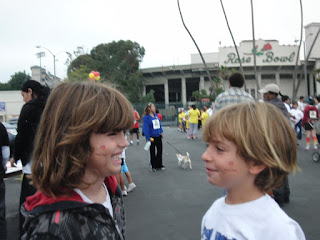 A few days before the race I contacted one of my Barefoot Friends from the Daily Mile, Michael Blanchard to see if he wanted to join me.  I knew Micheal lived near the course and I could use some advice on the terrain.  I was considering running barefoot but I really wanted to PR and needed make sure the road would not slow me down if I ditched the Vibram's.  Michael informed me that much of the race would be ran on coarse asphalt which solidifiesd my decision to keep the Fivefingers on. 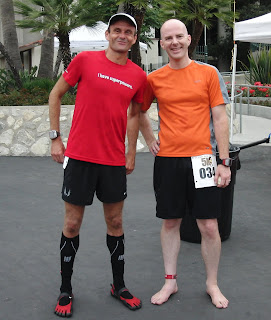 Micheal went on to PR barefoot with a 22:13.  Well done Micheal B 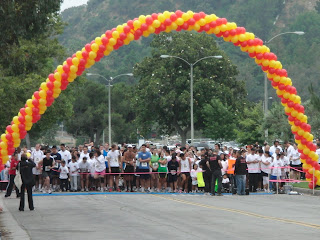 As we waited for the race to begin I started to size up the competition.  I began chatting with a young kid collegiate runner, who told me that there was a hispanic guy here who usually runs around a 15:30 and I would have my work cut out for me.  An old guy lined up next to me, he told me he ran around a 15 flat when he was younger.  Then there was blue shirt guy standing next to me who said he was also shooting for a sub 16.  Just when we thought the race was going to begin, the celebrities and poparazzi arrived.  Amongst them was  some guy from "Prison break" a hot chick from "House" plus 3 or so miscellaneous Latino Stars,  who all crowded in at the front to pose for some pictures.  The prison break dude moved in right in front of me blocking my path.  The kid who I was chatting with offered to let me move in front of him so that I would not be hindered at the start.  It was a very unselfish gesture and I happily accepted. 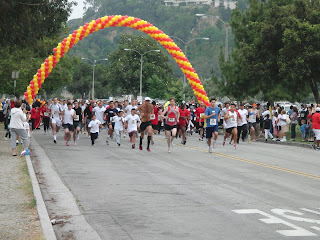 After the first 50 yards the Celebs were assimilated into the crowd.  I expected the Hispanic guy to take the early lead but he did not.  Instead  BSG (blue shirt guy) took quick control jumping if front of me as we exited the Rose Bowl parking lot.  It was my plan to run a sub 16 minute race, which meant I had to average a 5:09 mile or better.  One thing I never do but may try next time, is get my blood pumping before the race.  Before every short race I see the elite runner's do some short sprint's in preparation.  I often struggle finding my groove at the start of a race.
The course sounded simple enough a bunch of left turns around the Rose Bowl.  Both myself and BSG had never ran here before.  There was a small walking path about 15ft wide  that we were supposed to follow .  Unfortunately it was not blocked off for the race.  On the right side of the path we went head on with  vehicular traffic and there was a pace police car the right side of that.  It made for an interesting run trying to dodge pedestrians, bikes and other foot traffic, while swerving into the road when there was a big enough gap between cars.  For the first mile BSG ran in the lead about 50 feet in front of me.  Just about every third step he would look over his shoulder to see where I was.  I was almost comical how concerned he was about my position.  I was not on pace for my PR finishing my first mile in 5:20.  I needed to go faster.  I charged in front of BSG at an increased pace finishing my second mile in 5:06.  I was getting closer to the time I needed but didn't know exactly where and when I was supposed to turn.  At one point I had to yell at the cop to get directions whether to turn or not.  The third mile I was starting to find a groove I finished it in 5:02.  It was time to tun into the parking lot and stride it out for the win.  There were two roads that led to the finish line I didn't know which I was supposed to take.  The cop instructed me to take the first one. (bad choice)  I had gotten to the turn before they had a chance to barricade the road.  I had to cut across a grass median and through some parked cars to get back on course.  I was concerned that BSG might catch me.  The mistake had cost me valuable seconds but I was still in the lead. 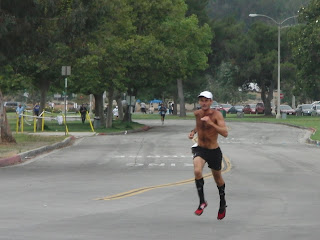 As I approached the finish line I thought I had the win but new it was not the PR I had wanted. 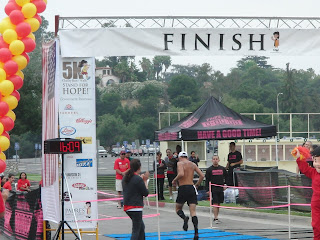 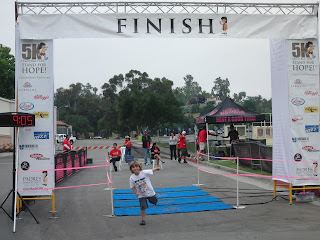 Upon further review I did not have the fastest time.  This picture clearly shows my Nephew Lucas clocking in at 9:09 running in his Crocs.  Lucky for me he wasn't he was not a payed entrant. 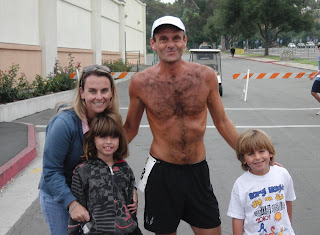 A minute after the finish with the family.

The week prior I raced in my Jamba Shirt  and shorts and felt very restricted.  This week I decided to back to my USTAF shorts (I am undefeated while wearing them) and lose the shirt.  The CEP Sleeve's felt good on calf's and the Vibrams with Injinji's 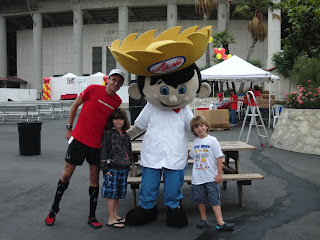 I'd like you to meet our new friend Jose. My Nephew with his new best buddy. 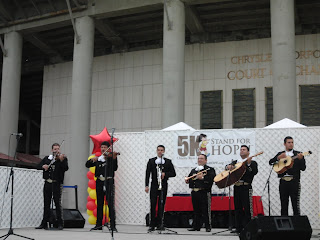 Before the awards ceremony they had some live music.  All of the Mariachi band members wore giant belt buckles.  I envisioned them all crossing the finish line together at Western States, while rocking some tunes. 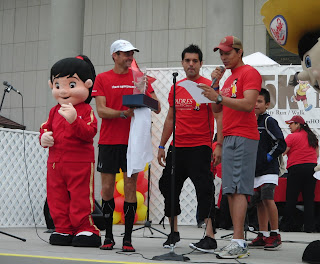 I happily excepted my trophy.  On the way back to my seat a gentleman asked me "Are you a professional runner?"   my response "No,  but I drink Jamba Juice."  (what a sell out) 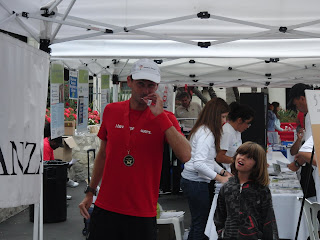 Before the awards ceremony a very sweet hispnic lady took the stage to thank the Padres Foundation for their support.  Her son is in dire need of a bone marrow match and she pleaded with crowd to register to be bone marrow donor's.  Although she spoke in Spnaish my sister and I were both almost in tears.  Joining the registry was easy, all I had to do was fill out a few forms and swab my mouth for some DNA.  Hopefully I will be a match for someone.  If you would like to join the registry please go to marrow.org 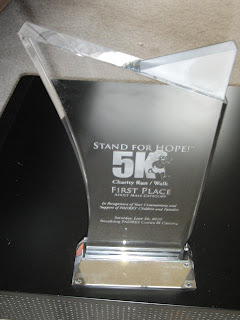 Probably the nicest trophy I ever won.  It weighs close 5 pounds 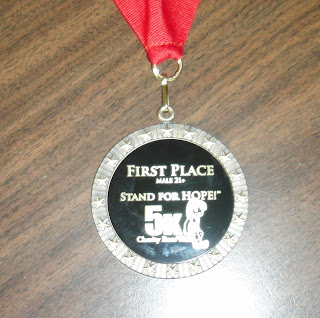 Life is good.
Garmin Race stats
Official results
If you have been reading this blog for the past month or two you're probaly thinking Pat neesds to do some more drinking and less running, after all the blog is named Bourbon feet.  If this It what you are thinking I agree. This  July forth I will be competing in the Hermosa Beach Iron Man. which involves running 1 mile, paddling 1 mile and drinking a six pack of beer.
Posted by Bourbonfeet at 10:44 AM