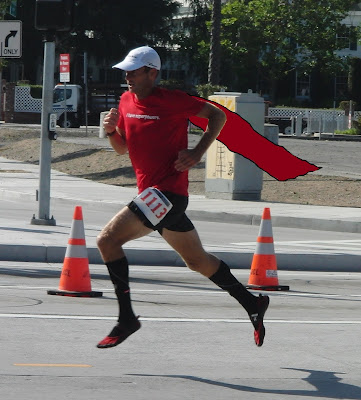 About a month I got an opportunity to join team Jamba Juice and represent them this summer. Father's Day  The Culver City 5K was the  first event In the Los Angeles market.  It sounded like fun and best of all it would be free.  I had the option to run either in the 5k or 10k.  With my body feeling gimpy I decided I would be better suited for the 5k but would run the 10k if they wanted me to.  If they had extra spots open I would be willing to run both events although my10k would be pretty damn slow.. 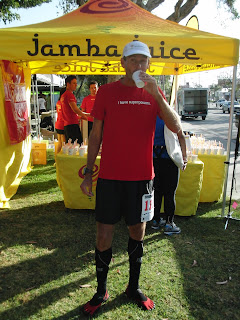 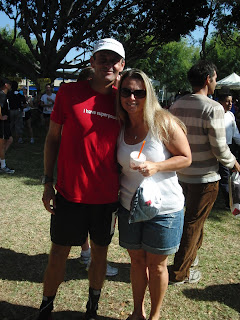 My sister and I
My father passed away a few years ago.  Since then my sister and I try to celebrate each Father's day together doing fun things while sharing memories of the old man.  I convinced her to get up early (yep real fun) and be my photographer for the event since Jamba wanted me to send them a race report.  Before the Race I checked In with the Jamba booth drank a Super Fruit Smoothie  and then went on to peruse the race expo.  First stop was the CEP compression sock booth.  The guy working there was pretty cool and was excited to see me wearing their calf sleeve's.  I told him they need to change the name of the sizing from womans small (what I wear) to men's "Men's Elite"  anyway I ended up with his business card after the race he said he would do his best to try and hook me up with some product.  I'd be really stoked if he came he came through for me. 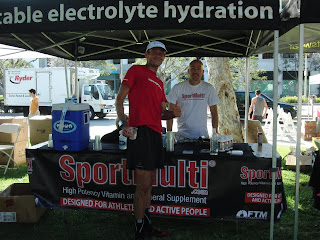 
The next Stop was the Supermulti Vitamin slash Noon booth.  I ran into a fellow Ultra-runner who I had I last chatted with when we both ran the Palos Verdes Marathon.  He is one of the founders of Supermulti vitamins and thought I should give them a try.  I have never been much of a vitamin guy but I do enjoy the glow in the dark urine (it never ceases to amaze me).  It was an offer I couldn't refuse and I shall take them everyday and report back how it goes. 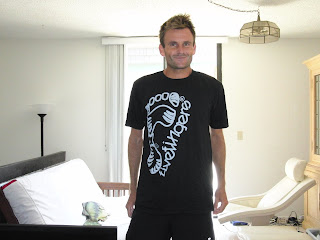 Dork wearing Free vibram shirt
The 3rd stop was the Sporteve booth.  They were the main sponsors of the event.  Sporteve is a local running store that has been selling Vibram Five Fingers

for the last 3 years.  The owner of  Sporteve was a real spunky lady who was also wearing her VFF's (she's the one waving the flag during the national anthem in the pic below).  They were giving out free Vibram shirts to any runners who raced in them.  It was pretty interesting to see the diversity amongst fivefinger crowd we deffietly came in all sizes, ages and ethnicities (quite a motley crew).  I came across about 15 people wearing them and of the 6 I talked to none of them had ran in them before. (I bet they have some sore calf's today) 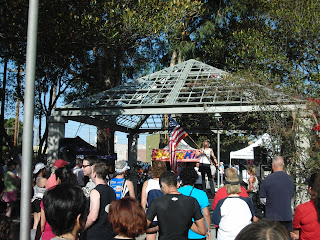 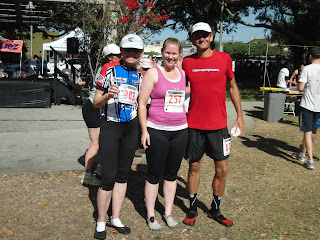 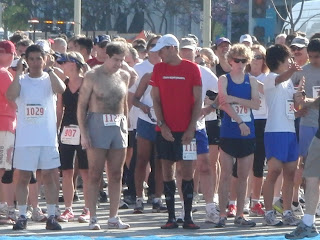 At the Start line I was visited by Future Pat from the year 2040 (ala "Back to the Future") He told me to take care of my body or else this could happen.  I took one look at future me and decided I need to get my butt in gear and create my own destiny. 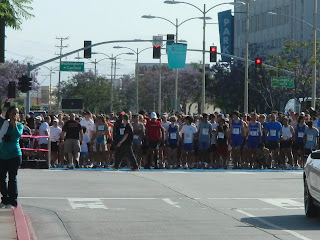 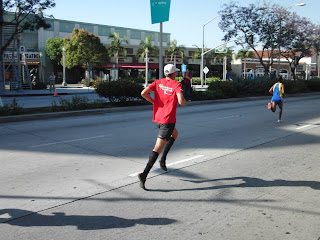 After 4 seconds i felt like I was 5 seconds behind 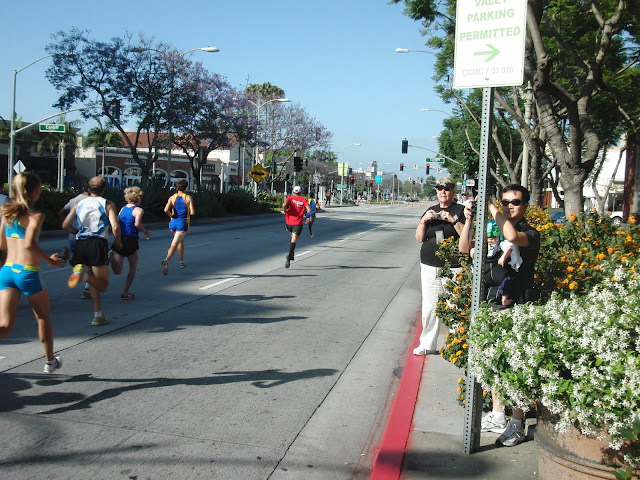 Stampede
From the start the eventual winner took command and never relinquished it after about 200 yards he was leading by least 50.  I have no clue how to run a 5k.  I came out strong at about a 4:30ish  pace for the first half mile which put me in second place.
Eventually 2 kids passed me pretty easily and a third was right on my heels.  At the turnaround of the there and back course I was about 50 yards out of 3rd and and 5ft from being in fifth.  I really wanted to catch the guy in front of me but my legs wouldn't let me as he extended his lead to at least 100 yards.  I did not like having someone right behind me, my pace was still decent and eventually was able to distance myself from him.
The second half of the race was pretty cool.  It was first chance to see my fellow Jamba Juice runners in their red shirts.  I got some nice hollers of support from my team members.  I also got some props from the other Vibram runners in the race, which there were quite a few of. 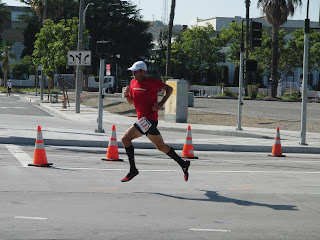 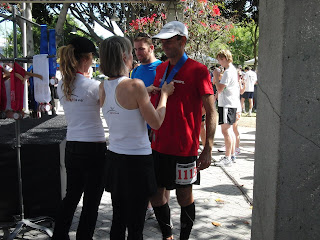 Although I was nearly a minute off the win.  It pays to be old the three guys who beat me were all in a younger division.  That equates to a first place medal for the old guy. 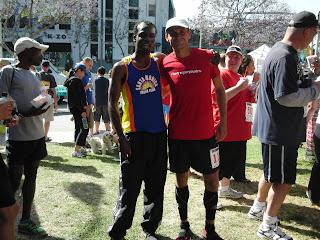 The winner of the race was a pretty damn good runner 15:13 and a nice guy 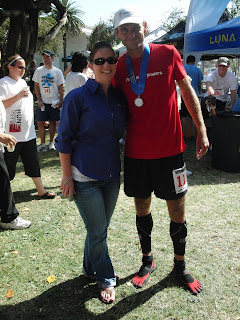 My Jamba Juice Rep congratulating me after the race 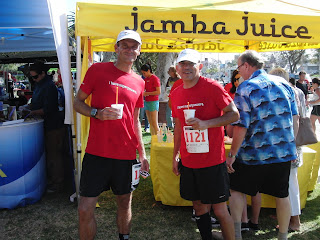 Drinking some "Yumberry" jamba smoothie's with a fellow team member. 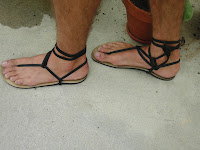 All in all it was a good Father's day morning. Thank you Jamba Juice for the support it was a pleasure being invited to participate in this race for free.  The body currently feels fair.  I really want to start clocking some miles again but that shall be a day to day decision. The next day I went for a few fast miles wearing a pair of custom Barefoot Ted made "Luna Sandals" he wanted me to try out.  I can run fast in them and they really hugged my feet well.  I just need to learn the proper tightness of the leather and grow some calluses next to my big toe.  After that I went to the beach for some lazy barefoot soft sand miles (not as many as I had hoped for) but good to make to my native habitat.. 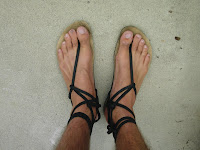 Currently I'm trying to get into the San Francisco Marathon for free as an elite runner.  It's along shot but worth a try.  The race Is on July 28th and is also a Jamba Juice event.  Jamba may also get me in but I don't think they would grant me the privilege of starting in a coral near the front.

I just found out there is a Stand for hope 5k at the Rose bowl this Saturday.  Entry is only $20 and the money goes towards helping kids with cancer.  I think I'll run the race in the morning and then watch how the Western States 100 miler unfold's online.  I tried to get in in the lottery but got lucky and didn't make it.  I got quite a few friends running in it and wish them the best of luck.