Leadville Boom Days and the Vonnie's Voice 5k. A prelude to Burro Racing. 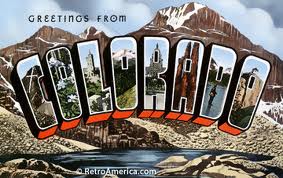 I drove all day on Friday and finally made it into Colorado.
The plan was to meet up with my Burro in the evening out at Twin Lakes about 30 miles outside of Leadville,

but alas my cell phone wasn't working so I figured I'd peruse the town a bit.
The boom days celebration was underway.
In this particular event motorcycle riders had to lay down on a mattress. Then when the Moderator yelled "Honey I'm home" They threw on some britches climbed threw a wooden window and then throttled up their motorcycle riding it 100 or so yards as fast as they could.

(The rider just before this one lost control of his bike driving straight through a wooden sign on the sidewalk. Nobody was hurt, just par for the course and the crowd laughed it off eager for the next rider.) 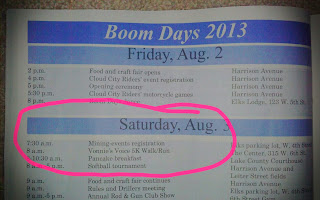 That evening when I got back to my friend's home in Leadville The altitude was taking it's toll on me.  Walking up the stairs to my bed I got extremely winded. (Leadville elevation is over 10,000' plus I was on the second story) so I walked back down and had a few Stone Ales.

While sitting around I thumbed through the preview magazine for
Boom Days. 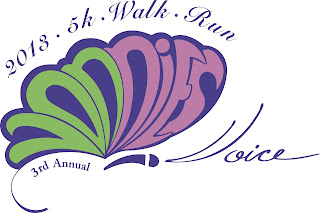 Vonnie's Voice 5k at 8 a.m. the following morning
That sounds like a pretty stupid idea? 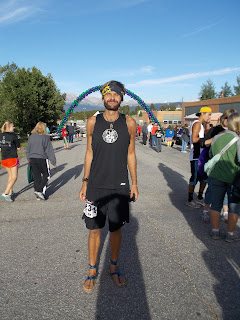 Bright and early the next morning there I was.  The race raised money for a Stalking Awareness organization everybody was super nice and it seemed like a worthy cause for my $35 to go to. 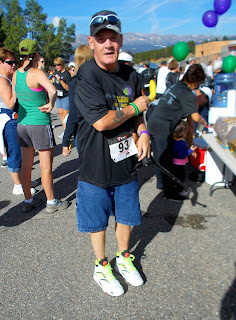 The competition was tough! Check out that dude's pumps.
"So Cool"

Time to Race
Lining up at the starting line there were a couple other dudes that looked fit.  I knew that pretty much suck at elevation but I had a bit of cockiness going for me, since I had won my last three 5k's.
If I was getting winded climbing stairs the night before I wonder what's gonna happen when I try and run at top speed? Plenty of time to breathe after the race?

The three of us went out fairly fast on course that started downhill but then had a lot of short ups and downs.  We hit the mile mark in about 5:30 with me in third place by about 50'  One of the two guys in front looked like he was about to break.  It was now time for me to make a charge during a steep climb.

Shortly there after it became a two man race but when I tried to push harder to take the lead I couldn't find any air to breathe.  For the first half of the race I was pretending to be properly acclimated and now I was paying the price.   First place was drifting away but at the same time my lead over third was also growing.

I kind of dogged it the last mile (I had nothing).  I was in Leadville to run the 22 mile Burro race the next day and there was was very little chance I would catch the leader.
(what a weenie I am!) 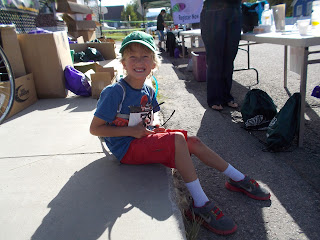 This kid probably would have beat me as well if he didn't skin his knees but I got him to tough it up and smile for a pic.  I think he was 6 years old and did the whole 5k.
What a cool kid!
:) 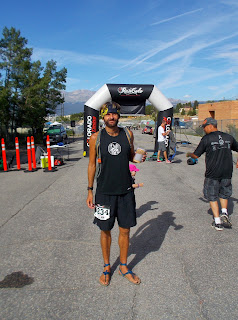 The dude who beat me was kid from CO working in Leadville for the summer.  He ran a good race and totally deserved to win and I'd love to race him again. 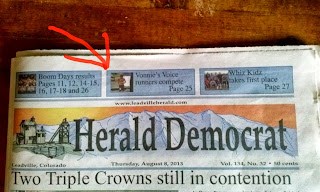 Later that week I even made local paper 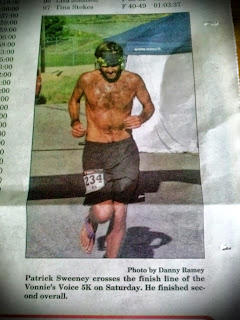 Just your average dude running 2 miles above sea level in a pair of
Luna Sandals
Which ways the beach? 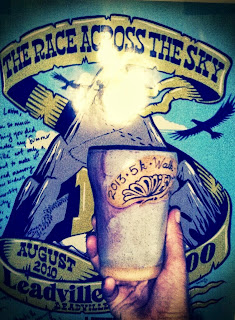 I did score me a cool mug. 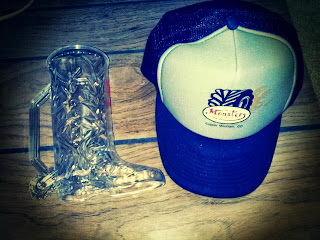 and some interesting shwag.

After the race I had few hours to kill so I decided to watch the Boom Days Parade. 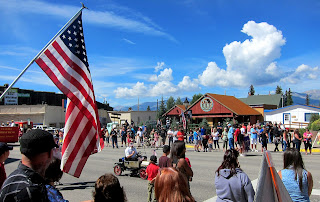 It was full of Shriners in funny cars, 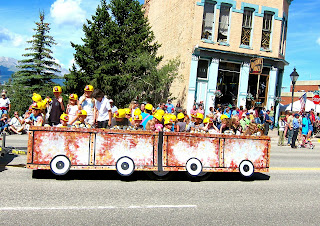 and miners too young to hit up bars.
(I think you have to be at least 11 years old in Colorado) 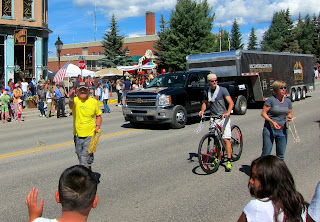 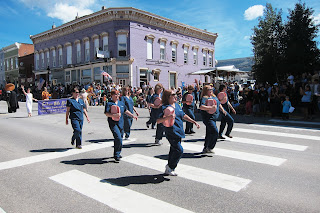 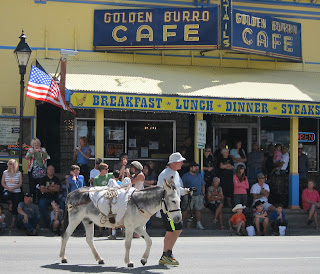 The burros were starting to arrive. 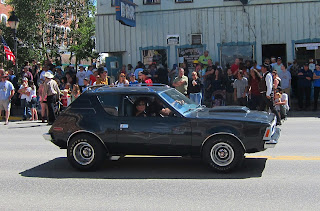 Time to go pic up my buddy Tyler Tomasello and get ready for tomorrows race. 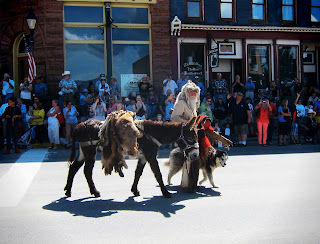 Posted by Bourbonfeet at 1:48 PM