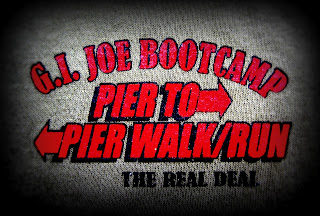 Pier to Pier, I've done that before in fact I do it just about everyday, but I'd never seen how fast I could go.
The online the info  for the race was pretty vague. Start at the Hermosa pier and run back on the sand? 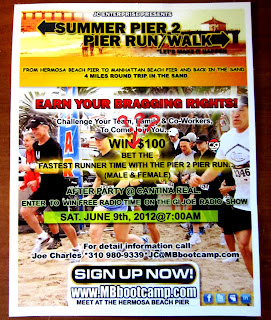 Bet the fastest runner?
(I think i meant to say beat but what do I know)
$100 prize for setting a new course record?
What is the record and who has it? 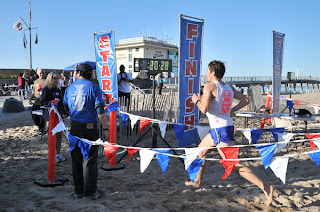 After a bit of detective work I found out it was this dude Daniel Geilman a Pose running instructor who a has 5k P.R. in 15:12 and has ran a 4:23 mile.  Iv'e ran close to a 4:23 mile but I have a hard time staying under 5 min miles for an entire 5k.
(an entire 5k that sounds so wimpy)
From the picture it looks like he ran around a  20:28.  If the race is in  soft sand in either or both directions that time would be nearly impossible to beat!

For some reason I had the impression that the race would start on the concrete strand and then return on the soft sand,  I figured I could run that in about 22 mins but really I had no idea how fast I could go or what the course would be.

I need to get as many miles in as possible in on the Sand in training for the Hermosa 24. which was just three weeks away.

At the Grand View 5k the week prior my win streak of 3 races in a row was snapped by second place finish.
This looked like a race tailor made for me to win.
(have I ever been to tailor?)

I was telling my mom about the event and she offered to sponsor me (yeah mom) Being the poor bastard I am i said yes with no argument but told her if I would pay her back I broke the record.
(now I had some real incentive to run fast.)

The Mon/Tues/Wed/ leading up to the event I had really trained my butt off running over 10 hours in the soft sand during a 54 hour stretch.  Then during one of my eight rounds of frisbee golf I played on Thursday. something gouged deep into the right heel of my foot.  It didn't really effect my running so much but i't still hasn't healed and I have been walking with limp for the last week. 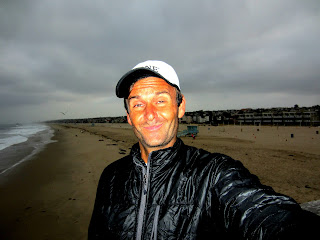 (Homeless dude on the pier)
I
woke up early in the morning of the race around 4:30  a.m. The flyer said that late registration should arrive by 6:00 a.m. race time at 7:00.  I was awake and had nothing better to do. 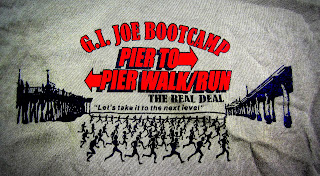 I was hoping my nephews would come down to watch.  The starting line is 10 minutes from their house and they they could of  watched the race and been back home in less than an hour but my sister was too tired to take them. (Bummer!)
Oh well.
In their defense my older nephew had a little league came at 11 a.m. and I would get to spend the afternoon with them so I wasn't that bummed after all. 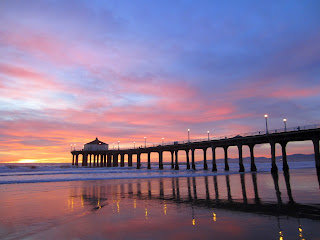 Manhattan Beach Pier
(What a tough place to live?) 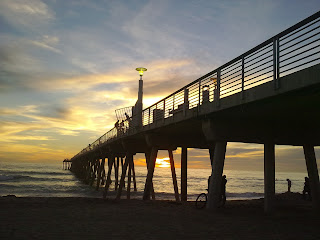 Hermosa Beach Pier.
(the starting line)
Down at the Hermosa pier before 6:00 I was the first runner to arrive.  Realistically I  could of showed up at 6:45 but better to be safe than sorry.  When I checked in I would find out what the course actually entailed. 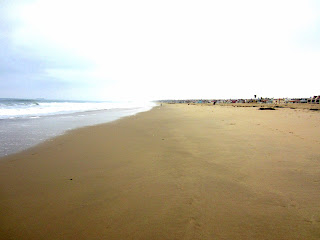 It turns out the whole race is on the sand not the strand (The cement bike/walking path next to the beach).  Although the start/finish was as far from the water as possible if runners wanted to they could run on the hard pack of sand near the waters edge.  I didn't matter what path you took you just had to run, touch the Manhattan pier and come back.  I scouted out the shoreline to see how high the tide was.  It wasn't perfect but was pretty low meaning that I would not have to run on that much of a slant and that sand would be relatively hard.

Although I love running on the soft sand it is extremly difficult and very slow. 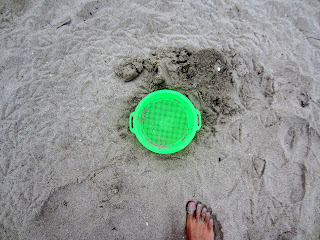 Well should I run on the soft sand or the hard pack?  I decided to conduct a few scientific experiments using
this awesome sifter I found to determine my game plan 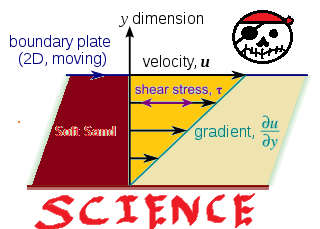 Judging by the data found above.  The viscosity (for lack of a better word) of the soft sand would allow my foot to sink three inches deeper causing the need for me to exert 30% more effort with each step which would also be 30% shorter in stride length.

Time to run
Not footage from the race but stupid widget that once provided music for my blog stopped working.  Press play if you want to see some dumb ass running (guess who?) while providing some theme music for the rest of this blog post, courtesy of the Tijuana Brass Band. 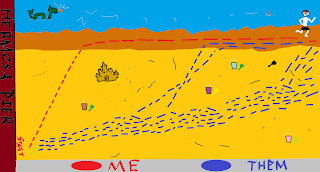 Out of the gates I was the only one to take 75 degree angle straight to the hard sand by the water.  This meant I would have to run a little farther but less of the distance would be on the soft sand. Most of the other runners took less than a 45 degrees angle toward the water.  By the time I hit the shoreline I was by myself.  In front of me by about 80 feet, far off to my right was group of runners struggling through the soft sand.  They had the lead but they had no chance of keeping it.

Once on the hard sand Iextended my stride and had made up the distance I was behind in less than a minute.    My calculations were correct  and when the rest of the pack saw me fly by they decided to follow my example and took a B line toward the water.

For the first mile I couldn't really find a rhythm with my breathing.  It was under 6 minutes but not by much.  If wanted to beat the record of 20:28 I would be ideal for me to get the pier in under 10 minutes giving me a little leeway for the return trip.
Now compare this to the Hermosa 24 where I only ran a couple laps under 40 minutes and most were well over 45 minutes.  I was now trying to go over twice as fast.Running in the hard sand is way easier than the soft stuff but it still slower to run in than a man made surface would be.

During the second mile I started to feel good.  I hit the pier in roughly 9mins 30secs.   The closest runner behind me was about a minute back and was not gonna catch me unless something catastrophic happened.  The record was well with in reach if could just maintain a respectable pace but now I was running into a stiff head wind.

I finished my second mile in under 5min 30 sec and was still feeling good.  I got a lot of smiles from the other runners still heading toward Manhattan.  I was on my third mile while many runners were still on their first.
Not from the race but this what it looked like.

The record was mine but by how much.  It's hard to gauge how much distance you can cover in sand.  I wanted to beat 20 mins but wasn't sure if that would be possible.  I waited till the last second before heading back up onto the soft sand and through the finish line in a new Course record time of
19:36.
(much faster than I had anticipated if I can run that pace at the Hermosa 24 the new world record will be around 250 miles)

Random Stat:
This is the 8th time I have ever ran in a event barefoot and the 5th time I have either ran farther than anyone else or had the fastest time. 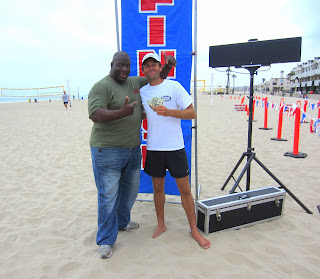 Cha Ching!
(I was able to pay back mom plus give her an extra $20 for having faith her in her son)

The race director Gi Joe of MB Boot Camp may have an intimidating stature but is truly a sweat heart of a dude.  The man is all about positivity and brings out the best in his clients.
Thank you to Joe and all the other volunteers for putting on such a great event. 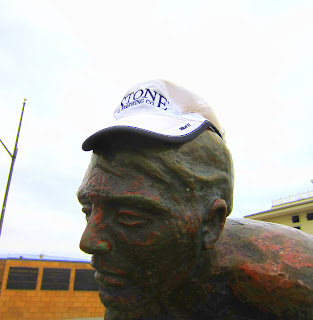 After the race was over I had a good time sitting around with all the other runners.  I did my best to spread the word about the Hermosa 24 coming up in just a few weeks and hope to see some familiar faces competing in the relay division 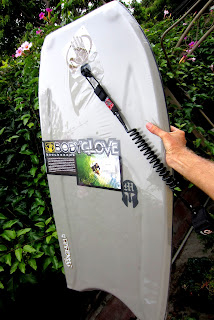 Then to cap off a great morning I even won a new Boogie Board courtesy of Dive N Surf.  My nephews birthday is coming up and he will stoked!
(I hope he lets his Uncle help break it in.)
Now all I got to do is get him a pack of gum to go with it. 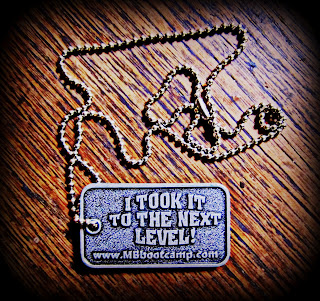 Posted by Bourbonfeet at 9:50 AM