Last Wednesday I was thinking ouloud via Facebook.  My body felt decent.  I had no plans for the weekend and wanted to find a race to run in.  I put the word inquiring to see if their was anything local under 40 miles and less than $50.
I did really think much ofit at the time, maybe I'd be ruinning a 5 or 10k.
With my friends I should have known better! My friend's Vanessa and Shacky Whom I had just spent the prior weekend with at Doughnut race were running a Pacific Coast Trail Run in  the Santa Monica Mountains.  They had both garnered entry from friends who couldn't make it.  Vanessa offered to be my sponsor for the event.
Wow!
I wasn't looking for a hand out but I also don't believe is saying no to a free lunch.
I checked the weather for Saturday and It looked like a perfect day for a race.
I had ran the course before back in 2007 it was my second Ultra ever and I had a great time..

Late Thursday night
I was checking the race website for driving directions only to find out the the event was on Sunday not Saturday.  (doh) Also that same night my friend asked me if I had ever ran a beer mile?
I was ashamed to answer No. since the race was 2 days away there would be no harm in having a little fun Friday morning

My first attempt at the beer mile 4 Stone ales 4 Laps.  Piece of cake!

The extra day also gave Mother nature more time fill her bladder.
(i think she may have drank a few Stone ales herself) 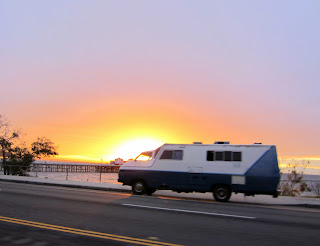 Sunday the forecast 100% Chance of Rain! (damn)
Yet on the drive up highway one cruising through Malibu I witnessed a pretty awesome sunrise. It's hard to take a picture and also a stupid thing to do while driving!  The question is did the RV ruin the shot or is it what makes it Awesome.  Clark Grizzwald would be proud to drive such a vehicle. 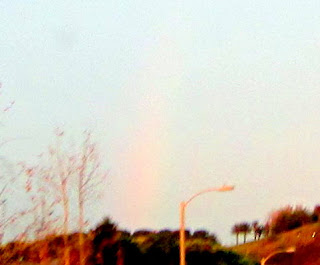 That was the only sunshine I saw all day.  The farther North up the coast I drove the darker the clouds would become.  Yet in the midst of this glomy race day Apocalypse.  I found myself headed straight to the heart of fading rainbow. 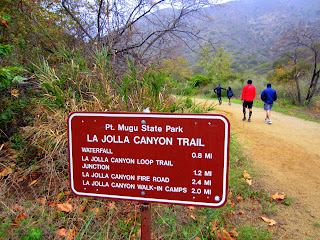 Minutes before I parked the skies began to pee.

I had brought with me 3 different pairs of Luna Sandals along with me along with my sketchers and a pair of Vff' Kso Treks.  Which i had not run in since Mt Dissapoinment 2010.  I could survive a little rain in Luna's but the course was covered in mud and the rain was to be relentless they might not be my best option. 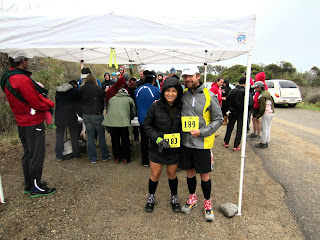 Why are you guys looking at me so funny? 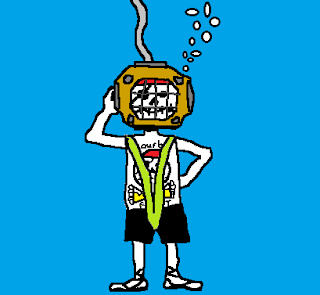 Earlier in the week Vanessa asked her friends what she should have her sponsored athlete wear for the race?
Suggestions ranged from Borat's swimsuit to a Deep sea diving helmet.

I think I got off relatively easy? 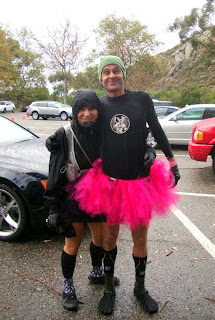 Vanessa brought me a Glam runner Tutu, well she brought 2 one green
and one pink but really, what kind of loser wears a green tutu? I know you may find this hard to believe but I had never worn a tutu before, unlike the other males in my family (should I be proud or ashamed to admit this?)
However, I got a long way TuTu go before I reach the legendary Badwater status of this Dude.
Aint gonna happen?
(well probally not.)

I guess its time to Race? 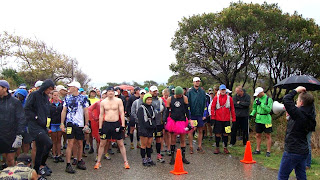 When we lined up at the starting a few cute girls asked to have there picture taken with me.
Hmm?
Maybe I like this tutu?
Last week the guy who beat me wore one, perhaps it will make me faster.
(yeah right)
The funny thing is I felt more uncomfortable wearing a shirt and stupid vibrams on my feet. On your Marks, Get Set,  GO!
Out of the gates did I jump out in front?  Not even close about 5 dudes jumped out at about 8 minute pace up the first 3 mile climb.

It had been along time since I had worn shoes on my feet and the vibrams felt pretty awkward.  The rain was coming down pretty steady but this first part of the course had yet to show it's saturation. Did I make the right decision not to wear sandals?

After the first 30 mins of racing I could still see the leader and figured I was about 3 minutes back.  This did not bode well for me to be  in contention on this day. I was running apprehensively.  My amplitude as a trail runner is pretty low.  I only do it a handful times a year and lack the confidence that comes with experience..  I am capable of doing well if the situations are right but on this day.I was more concerned about falling over than going fast. 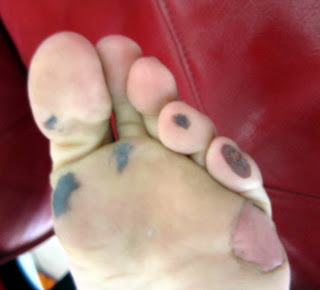 My feet were a little banged up with blood blisters from the last week's barefoot race  I could feel each time I pushed off on my forefoot.  It wasn't causing me too much grief but  forced subtle changes in my stride.

A lot of the trail was single track and My tutu gave me somewhat of a Ghetto Booty.  I kept getting  fondled by shrubbery as trail  reach out for a few cheap thrills at my expense.  I thought about ditching the Tutu after the first 8 miles but I was man enough to keep my skirt on.

By the end of the loop I realized the vibrams were the right decision. by now the course was starting to fall apart.  The weather sucked but it was kind of fun at this point skipping around in the mud.

I carrying 2 water bottles and had only drank a few sips.  I upgraded one of them  to a bottle filled coconut water from my drop bag.  At which point I decided to ditch my rain soaked shirt for the rest of the race.
(weather was in the low 50's)

Up the climb on lap 2 I passed a ton of runners from one of the other races going on .  They were all on their decent and I got a ton of smiles along the way. Everyone was super nice and positive and I did my best to return the favor with some encouraging compliments to each of them. 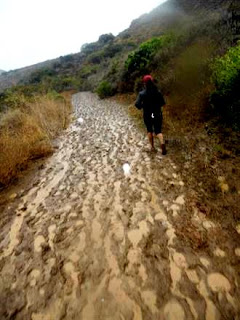 Not too sandal friendly
The course was getting ugly.  On parts that should be a sub six minute mile going downhill I my pace was closer to ten.  I still felt good during the climbs but downhill I had nothing. 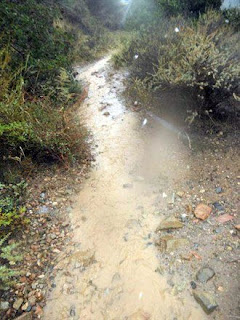 Third loop (a repeat of the first)
For some dumb reason I was carrying a full water bottle that I did not drink from thus far in the race. (That's kind of Stupid!) I decided carrying too bottles was unnecessary and went off with just that one  It turns out when I was cleaning it the night before I forgot to wash the soap out.  Delicious it was not.
By this point the body wasn't feeling that great.  The changes in my stride were causing some top of the foot pain.  I got I grouchy and even walked a little bit of the uphill. (lazy bastard)  Quickly I realized it was warmer if I ran so sucked it up and finished the loop. I got out my funk when I saw some friends going the opposite direction, once again the dumbass in the tutu made someone else smile which intern made him smile and everyone lived happily ever after.

Well not quite yet I still 9k left to go.

Congrats Birthday Boy Chris Price had just won the race in an amazing time of 4:12.

I still had to run theFinal loop 4.5k straight up and back down. I ditched the soapy water and decided to  haul ass up the hill and get this thing over with.  On the way up I was passed by my buddy Dom (the Ac100 winner) He looked great and I was proud of the dude, he works hard and does it with a positive attitude  which I totally respect.

A this point I was in 5th place and I didn't really want anyone to pass me.  I held on the entire way up. At about mile 29 I hit an embedded rock and went flying.  If you hit right part of trail you could have lot of fun sliding in the mud. (all I hit were rocks).  I only had a few miles left and they were downhill I ran them the best I could and maintained  my position. 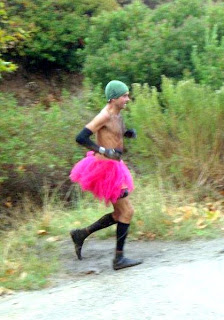 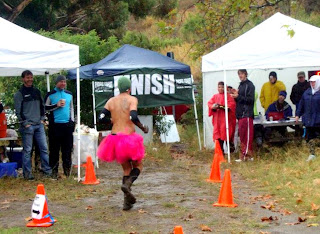 Tired, cold, bloody, with a mud soaked tutu
I finished the race with a smile

Why did myself and  a bunch of other crazy people go through such an ordeal you ask ? 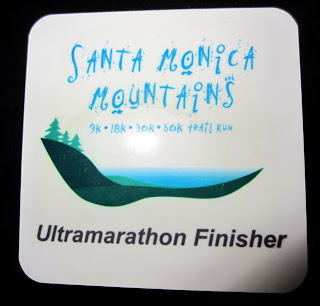 By the way that coaster is from the first time I ran this race back 2007 I have used nearly everyday since for my morning coffee.

After the race I met up with Vanessa and Shacky.  They were both pretty stoked I had finished the race Ballerina style.

Thank you guys for your support and thank you all the volunteers and to everyone who gave me a smile out on the course. 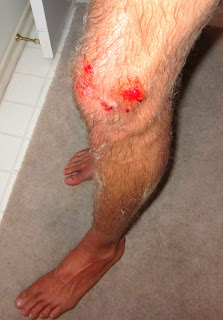 When I got home about an hour and half laterblood was still flowing from knee. It was time to lick my wounds fill my belly and inebriate the pain. 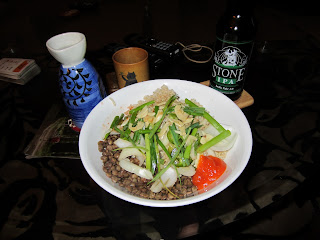 After some warm food Hot sake and some Stone ale. 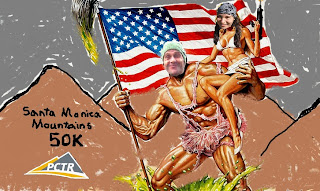 Artists rendition of me carrying my sponsor Vanessa seconds after crossing the finish line.

Life is good.
Posted by Bourbonfeet at 2:50 PM